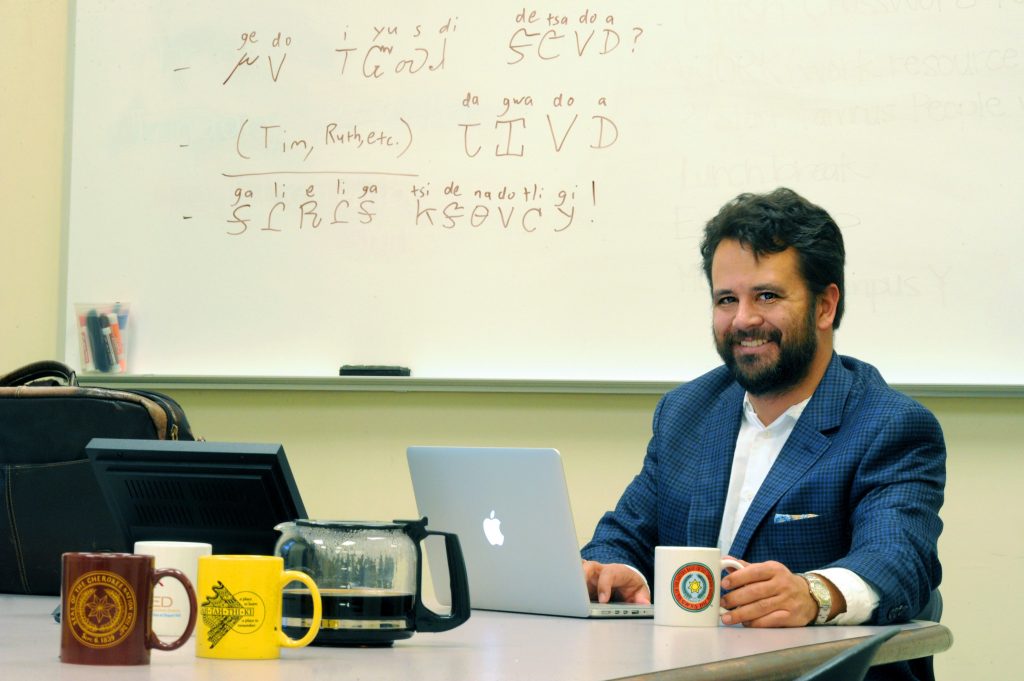 Walk past Abernethy Hall Room 102 on any given Friday afternoon during the semester and you’ll likely hear sounds of an endangered language wafting through the halls.

American studies assistant professor Ben Frey ’05 started the coffee hour in 2013 after returning to UNC-Chapel Hill as a Carolina Postdoctoral Fellow for Faculty Diversity. It is one of many ways he is working to revitalize the Cherokee language.

Indigenous people have spoken Cherokee in North Carolina for 11,000 years. Now, only 238 people — 1.4 percent of the 17,000 citizens of Eastern Band of Cherokees — speak the tribe’s Kituwah dialect. Most of them are 65 and older.

Preserving a culture’s language is important for many reasons, Frey said. Unique knowledge and traditions held by these cultures can offer solutions for today’s pressing challenges, from environmental sustainability to health care. Connecting to one’s heritage helps individuals and communities understand who they are.

Fortunately, Frey’s research on how language use declines — or shifts — offers a path forward to revive this endangered language.

Frey’s Cherokee language education began while he was a German and linguistics major at UNC in the early 2000s. A citizen of the Eastern Band, Frey grew up in Birmingham, Alabama. Cherokee was not taught at home.

His grandmother was among the Cherokee youth removed from their homes, placed in boarding schools and punished for speaking the language by a U.S. government bent on eradicating native cultures. While she and Frey’s great-grandmother spoke Cherokee to each other when they didn’t want the children to understand, they did not pass on the language.

Frey discovered he had a talent for languages while learning German in high school and pursued it at Carolina. During the summer of his sophomore year, he decided to put his acquisition skills to work learning his ancestral tongue in Cherokee, North Carolina, from cousins who oversaw the tribe’s language program.

Frey continued improving his Cherokee fluency while completing his degree at UNC and, later, during a year-long Cherokee master/apprentice program at Western Carolina University and while earning master’s and doctoral degrees in German at the University of Wisconsin-Madison. It was his doctoral research in language shifts that provided insights that would inform his work to revitalize the Cherokee language.

Both communities experienced cultural discrimination that curbed use of their native language. Frey expected to find that the use of Cherokee had declined to a greater extent than German because of the government’s eradication effort. To his surprise, Frey found that use of German in the Wisconsin communities declined more.

The reason for both shifts: the evolution of social network structures away from native languages due to industrialization, urbanization and tourism. Across the country during the 1800s and 1900s, enclaves of non-English-language speakers shifted their language to English out of necessity.

“Understanding the mechanics of how a language shift happens gives you a window into how it might go the other way,” Frey said. “So, if we’ve broken down social networks in order to shift a traditional language to English, presumably a way to shift back is to build them up.”

It should be as easy for students to learn Cherokee as it is to learn Spanish or German, Frey said. Students in his Cherokee classes learn by listening, reading, writing, using conversation tools and doing exercises. But language is also about social interactions and context. Helping restore those interactions within the Cherokee community in North Carolina is key.

“We went to a restaurant in Yellow Hill, the governmental seat of the Eastern Band of Cherokee Indians, and the menu was in English and Spanish,” Frey said. “We need it in Cherokee.”

Starting the process with local businesspeople provides a platform for expanding use of Cherokee across the community, but reviving a language requires much more.

“Think about all the things you interact with that are in English — novels, music, radio, art, entertainment, social media memes, YouTube videos,” Frey said. “All of those things are necessary for people to experience in Cherokee, too.”

Frey has teamed with UNC music scholar Mark Katz, director of the Institute for the Arts and Humanities, to bring hip hop artist Joshua Rowsey to Cherokee to encourage music making among students at the Cherokee immersion school.

This spring, Frey plans to bring UNC students to the Second Annual Undergraduate Cherokee Language Symposium at Western Carolina University to interact with college students from across the country who are also learning Cherokee.

Frey’s revitalization efforts have found fertile ground in students like UNC sophomore Brooklyn Brown. A native of the Birdtown community of Cherokee and a first descendant of the Eastern Band, Brown wants to help her community bring the language back.

“The Cherokee language could be gone in a few decades,” Brown says. “We need all the support we can get to change that. I hope to be a part of the fight to save Cherokee and be able to pass this on to generations.”

North Carolina boasts the largest Indian population east of the Mississippi. UNC’s American Indian and indigenous studies (AIIS) area in the American studies department honors that distinction by offering an undergraduate major, a minor and a Ph.D. concentration. Undergraduates may take Cherokee to fulfill their foreign language requirement.

AIIS’s interdisciplinary faculty study and teach the histories, contemporary experiences, languages, culture and political statuses of indigenous people living in and beyond the United States.