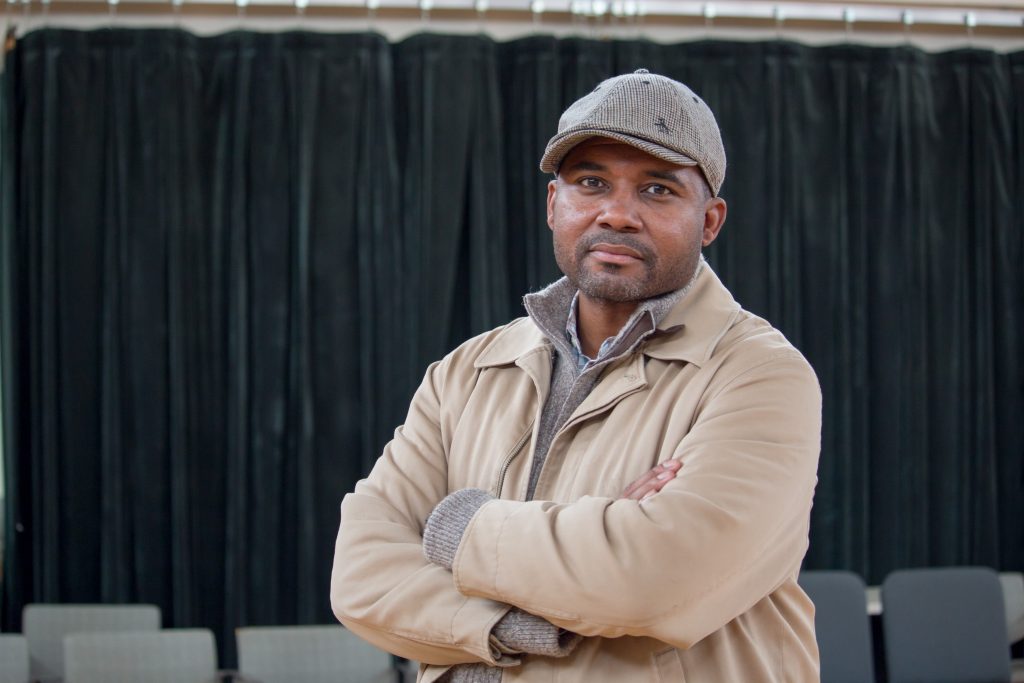 Shining a spotlight on African-American history

Mike Wiley was a young actor in 1999 when he discovered a historic tale that inspired him to write his first play. It changed his life.

The play is about Henry “Box” Brown, who used an unlikely prop to escape a life of slavery in 1849. He climbed into a wooden crate in Richmond, Virginia, and shipped himself north to freedom. Brown arrived safely in Philadelphia and spent his remaining days as a free man.

“I gravitated to the character,” said Wiley, who had struggled to find his own path in life.

After writing One Noble Journey, Wiley took his one-man, one-prop drama on the road to educate and entertain audiences of all ages. He won support through the National Black Theatre Festival, then produced, marketed and performed the play to schools, libraries and small venues.

It was a hit. Wiley was encouraged to pursue an MFA in dramatic art at UNC-Chapel Hill; he graduated in 2004. He kept writing plays that spotlight challenging chapters of African-American history. Audiences clamored for his one-man portrayals of Jackie Robinson and Emmett Till and a musical about unsung heroes of the civil rights movement.

Wiley has served as a distinguished visiting professor at Carolina and Duke. He has presented his works in the United States and abroad. For these achievements and “contributions to humanity,” he received the 2017 Distinguished Alumnus Award on University Day last October.

Wiley has won acclaim for creative versatility, as he morphs on stage into roles spanning gender, race and age. He embodied 36 characters in his play about the killing of Till.

“[His] solo works …  feel like an evening spent among an intense community of people, united at times and divided at others by a common dilemma,” wrote local theater critic Byron Woods.

It took Wiley a while to find his calling. He grew up in the ’70s and ’80s with a hard-working single mother in Roanoke, Virginia. He was bused across town to recently desegregated public schools, where he didn’t always feel welcome.

He tried out for school plays and once got to portray Abraham Lincoln. “I loved being someone else,” he said.

In 1989, during the summer before the Berlin Wall came down, he was among 15 American teens invited to perform with 15 Russian counterparts in Moscow and Stalingrad.

“That was my first taste of what touring with a troupe of actors was like,” he said. “It was a beautiful moment.”

Wiley became the first in his family to get a four-year degree, from Catawba College in Salisbury. Afterward, he traveled with a Shakespeare company and a children’s theater, where he learned the business of touring.

His most stunning achievement came from a collaboration with his students at Duke and Carolina in 2010, who helped him research stories of the Freedom Riders in the summer of 1961, about civil rights activists helping to desegregate public buses in the South.

That inspired The Parchman Hour, the musical Wiley wrote, produced and directed with a student cast. His students performed at Carolina and across the South, including at the 50th Freedom Riders’ reunion in Mississippi. Wiley directed another production of the show at PlayMakers Repertory Company in 2011, drawing yet more acclaim.

His newest play, Leaving Eden (at PlayMakers April 4-22), is a timely but hopeful fable of a fictional Southern town facing immigration, racism, economic woes and the rise of a dangerous demagogue. He will also premiere an ensemble version of his one-man play, Blood Done Sign My Name, at Raleigh Little Theatre in May.

Wiley especially loves to present his plays to young people, through his company Mike Wiley Productions, based in Pittsboro. He tells them that acting allows them to escape by trying on other people’s lives. “We can be heroes.”