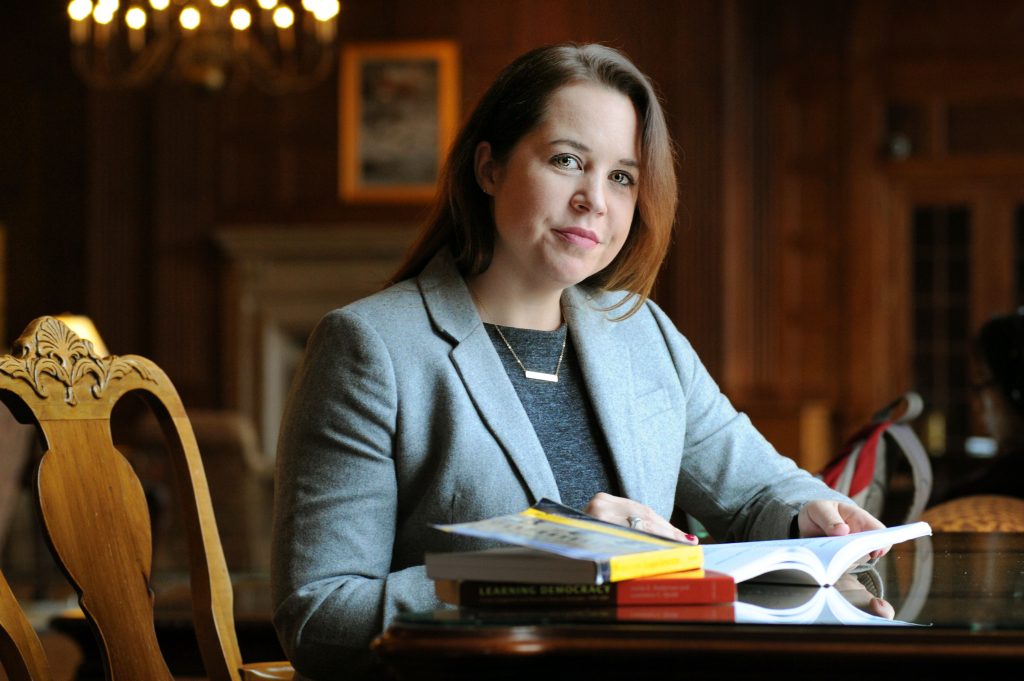 When Katharine Aha walked into a Carolina undergraduate class on “Politics in East-Central Europe,” she had little knowledge of the subject matter. But an inspirational professor brought the topic to life with memoirs, documentaries and a talk by a leader of the Polish Solidarity Movement.

That course shaped her future academic interests. Today, Aha is a UNC-Chapel Hill doctoral candidate in political science, and that same professor, Milada Vachudova, is chair of the curriculum in global studies and her dissertation adviser.

“A second class with Dr. Vachudova and a Burch Field Research Seminar in Vienna, Bosnia-Herzegovina and Croatia made me know I wanted to continue researching this part of the world and pursue an academic career,” Aha added. “I’ve always been interested in minority rights and politics in the United States, and my work is expanding my interests to an international context.”

Aha studies the ability of ethnic minority political parties in East-Central Europe to join governing coalitions in nation-states as they transition from authoritarian rule to democracy. After the fall of communism in Slovakia and Romania, for example, sizable Hungarian minority populations chose to form political parties to represent their interests instead of joining a mainstream Romanian party. How do these parties interact with existing Romanian parties? Do minority party members benefit from such coalitions, and how does it affect the country’s transition to a democratic government?

Testing her theories required extensive work with data from these countries. Private support was critical, and a Druscilla French Graduate Student Fellowship enabled her to complete this work.

“Last summer I was able to compile voting and economic data sets for elections in Slovakia, Bulgaria and Romania to understand how voters hold political parties accountable,” Aha said. “It’s crucial work that I could not have completed without this fellowship.”

Drucie French, who received a B.A. in English in 1971 and an M.A. in communication in 1978, both from Carolina, is a strong advocate for supporting graduate education. She went on to receive a Ph.D. in depth psychology and mythological studies from the Pacifica Graduate Institute.

“Universities are a three-legged stool: There are undergraduate students and faculty, but there are also graduate students who are an integral part of how a university works, particularly at a large public university like Carolina,” French said. “Graduate students are necessary to attract and maintain great faculty. They provide teaching assistance, and they are a critical part of the research process that makes us attractive for public and private grants.”

Returning to UNC was Aha’s first choice for her Ph.D. program, which is part of the Center for European Studies, one of only five in the nation to be designated as both a National Resource Center by the U.S. Department of Education and a Jean Monnet Center of Excellence by the European Union. She earned a master’s in diplomacy and international relations from Seton Hall University.

“UNC is one of the best universities to study European politics,” she said. “We have opportunities to work with scholars from all over the world.”

In addition to advancing her research, Aha has honed her teaching skills, teaching the very course that inspired her future studies.

“My goal is to help students look at issues through different lenses and be able to analyze and draw conclusions. I like the diversity at UNC. These differing perspectives make discussions richer and my interactions with students deeper.”