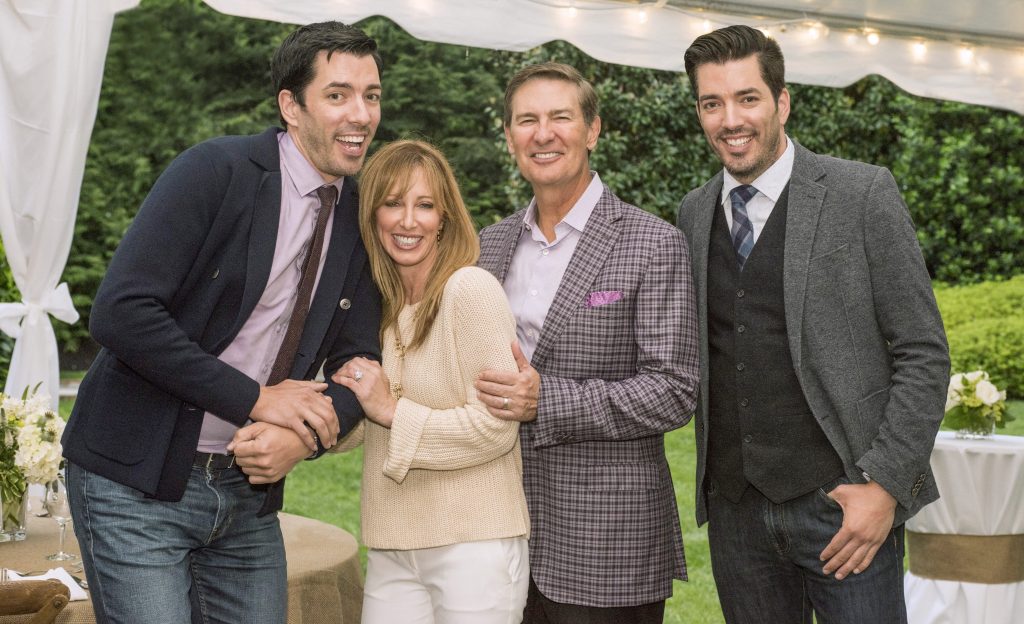 Lowe and wife, Julia, with Jonathan and Drew Scott, hosts of “Property Brothers,” at an auction to benefit the American Heart Association. (photo courtesy of Scripps Network)

The man behind HGTV

Lowe built Scripps empire on DIY, food and travel — and a focus on core values

At age 10, Ken Lowe ’72 built a makeshift radio station in the garage on his family’s rural North Carolina tobacco farm.

“I think my biggest audience was probably livestock,” he joked in a recent interview.

Lowe has come a long way from that first foray into broadcasting. Today he is chairman, president and CEO of Scripps Networks Interactive. His accomplishments over four decades with Scripps include being the brainchild behind HGTV, managing the transformation of the Food Network and Travel Channel and presiding over the launch of DIY Network and the Cooking Channel.

“For me, this was like watching your first-born child leave the nest because I created and started it, but it just seems like a natural fit,” said Lowe, who will serve on the Discovery board once the transaction is complete.

Lowe grew up on the outskirts of Mount Airy, the town that was the inspiration for Andy Griffith’s fictional Mayberry. He was always fascinated with how radio provided a window to life in the bigger cities and the world.

But Lowe had another love: construction — everything from building tree houses to helping his uncle, a contractor, during summers. That, plus a strong entrepreneurial streak, helped plant the seed for the HGTV launch years later.

At UNC, Lowe majored in radio, television and motion pictures, and he roomed with Rick Dees, a radio personality known today for his Weekly Top 40 countdown. In the late 1960s, the campus radio station asked the pair to interview an artist they’d never heard of. The singer showed up with a beat-up guitar, sang a few songs and delivered long, rambling answers. The artist? James Taylor, who would release his debut album a few months later.

“We joked that we were the first two guys to discover James Taylor and then kind of blow him off,” said Lowe.

After college, Lowe took radio jobs in several cities. He joined Scripps in 1980 as general manager of radio properties and later was named vice president of programming, promotion and marketing for nine TV stations.

In that era of sensational talk shows, with hosts such as Morton Downey Jr., Jerry Springer and Geraldo Rivera, Lowe said he was frustrated by the lack of quality programming for families, especially shows targeted to women. He began developing shows that appealed to upscale and educated female viewers, a demographic that advertisers covet.

Initial response to the 1994 HGTV launch was tepid: “We can’t wait to watch a network about grass growing and paint drying,” Lowe recalled critics saying.

But he persisted. Today, the network includes hits such as Fixer Upper and Property Brothers, while popular Food Network shows include Chopped and Diners, Drive-Ins and Dives.

Lowe, head of Scripps since 2008, said a key was to focus not just on “whether we’d be successful as a business” but company culture and core values, which include integrity, diversity, humor, and compassion and support.

In the future, Lowe said he hopes to spend more time with his wife, playing golf and cultivating his growing car collection. ”He serves on several nonprofit boards and plans to spend more time supporting the Girls Leadership Academy of Wilmington, the inner city charter school for girls in North Carolina which he co-founded.

As a kid from rural North Carolina whose parents never went to college, Lowe said Carolina was “eye opening” because of the diversity of students he encountered on campus. He remains in contact with many former professors, mentors and students. Including one zany former roommate.

“Rick Dees and I are best friends — I just spoke with him,” Lowe said. The feeling appears mutual. In April, Dees tweeted: “Congrats to my bff Ken Lowe, inducted tonight into the Cable TV Hall of Fame!”