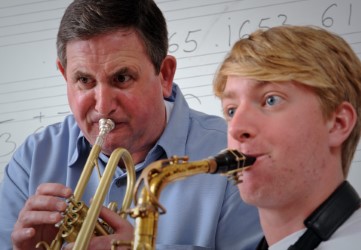 Celebrating 40 years of jazz at Carolina

Jim Ketch is a music professor and a passionate jazz musician. As a professional trumpeter, his talent has taken him around the globe and has allowed him to perform with Aretha Franklin and in venues like Carnegie Hall. This spring marked the 40th year of Ketch’s leadership of the Carolina Jazz Festival. We talked to him about the origins of his talent, his love of the trumpet and his most memorable performances.

Music professor Jim Ketch (left) tells students “once you have an idea of what you want something to sound like, your body has a much easier job in making that sound happen.”

Q: Do you remember the first time you played the trumpet?

A: I do! As a fourth grade student in Peoria, Illinois, our class was invited to visit the band room of our school where the local music store had created a display of all the instruments that we could choose if we wished to start in fifth grade Cadet Band. I was attracted to a cornet, and the store representative allowed me to hold the instrument and try to produce a tone. Much to my delight, the cornet produced a loud brassy note, and I fell in love with that sound. I asked my parents to sign me up for band and to please allow me to play cornet. They were very supportive of this decision, and I started in Cadet Band as a fifth-grader.

Q: When/how did you fall in love with jazz?

A: I was born in 1952 so I grew up at a time when you could hear lots of instrumental music on the radio or television. Once I got involved in the school band program as a cornetist, I became particularly interested in any trumpeter I might encounter. Well I heard recordings of Louis Armstrong and Al Hirt. I remember my mother using a book of S&H Green Stamps to get me a Duke Ellington recording called Afro-Bossa. My father took me to an Al Hirt concert where I heard incredible Dixieland jazz as well as a classical rendition of the Carnival of Venice. By seventh grade I was playing in a little combo. We even were featured on a local television show called What’s Your Hobby?

Q: Do you have a performance that is the most memorable for you?

A: I have been privileged to share the stage with quite a few jazz artists, pop stars and brilliant classical musicians. Among my most memorable performances:

Q: Have you had a not-so-great performance? If so, what happened, and what did you learn from it?

A: Trumpeters, in particular, live or die by their chops. I have performed recitals where my lips were simply not up to the task of playing a full 75-minute recital. It is very disconcerting when you simply can’t perform well. The adrenalin surges and the anxiousness grows. Believe me, it is a long 75 minutes.

Q: If you could tell the 10-year-old you one thing, what would it be?

A: I teach all ages of students. The best advice I give them is to quickly develop a vivid aural imagination. Once you have an idea of what you want something to sound like, your body has a much easier job in making that sound happen.

Q: The Jazz Festival was 40 years old this year. What has been a contributing factor in its success/longevity?

A: The key ingredient has been my sustained energy and a university that has shown a willingness to partner such that a small unit (our jazz area in the department of music) can dream a bigger dream. As a result, several decades of students and our Carolina patrons have had the world of jazz come to Chapel Hill.

Listen to a UNC “Well Said” podcast with Ketch: