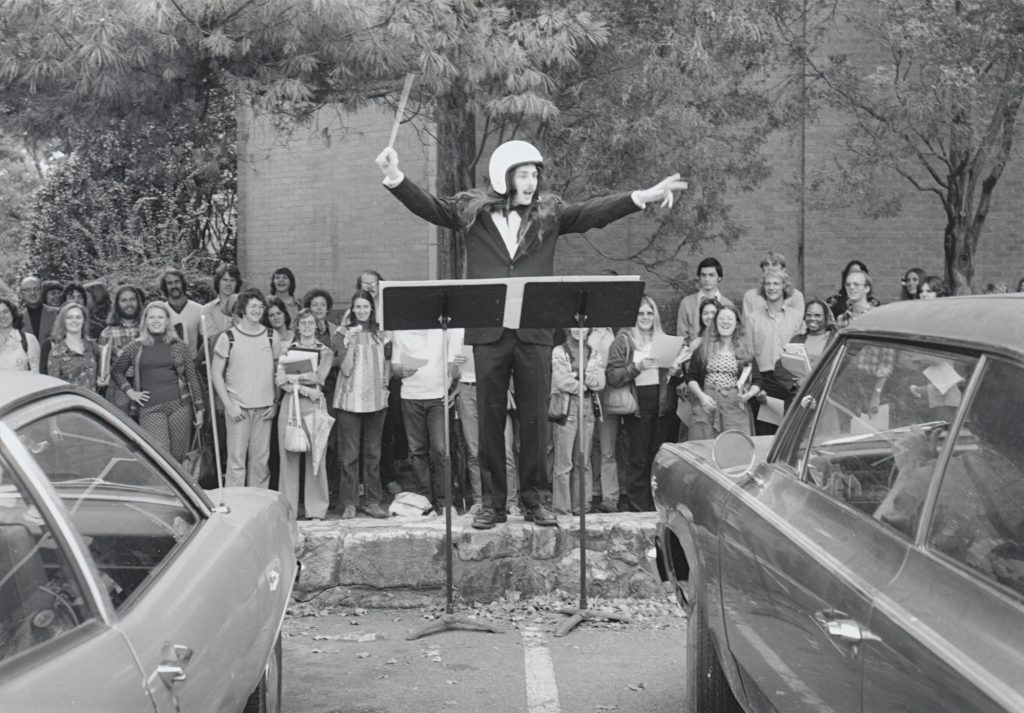 An audience gathers for a car concert outside Hill Hall in the 1970s. Do you recognize anyone in this photo? Do you have fond memories of Hill Hall, which re-opens in January, or being involved in music at Carolina? Share your stories by emailing college-news@unc.edu. (photo courtesy of the N.C. Collection, Wilson Library).

Alumna Gloria M. Huffman-Fernandez (music/French ’68, ’70 & ’77), a retired private piano teacher in Stamford, Connecticut, writes about her memory of conceiving and performing in the Nov. 12, 1975 “Car Bibbe” concert in this summer 2020 update:

“In early November 1975, I was at a party at a fellow music grad student’s home when I conceived and suggested the idea of presenting an avant garde music concert for our non-music major students. Craig Lister immediately liked the idea. Within a day or so, he came up with “Car Bibbe,” by Al Hansen of Sweden. A program was printed, a conductor was found, a photo was taken for The Daily Tar Heel newspaper, and four performers – including me – volunteered to participate. I was impressed with the boldness and speed with which the event took shape. I still have the 11/12/1975 program, which lists Conductor David E. Boelzner (Winter Park, FL); Andre Barbere (New London, CT) – 1966 Rambler Rogue; Ross Ellison (Hershey, PA) – 1970 AMC Ambassador; Gloria Huffman Fernandez (Asheville, NC) – 1971 Ford Pinto (on left in photo); and Craig Lister (St. Louis, MO) – 1969 Volvo four-on-the-floor. I also have the Sunday, 12/7/1975, article  from the Wilmington Star-News (conductor in wig without helmet). That concert was pure fun, and none of us has ever forgotten it!”

Reader Vicki Whitaker (B.A. geography ’86) of Pflugerville, Texas, writes this about her memories of Hill Hall:

“From 1978 to 1982, I worked in the computer science department at UNC. At that time, computer science was located in New West Hall on Cameron Avenue, just south of Hill Hall. My office was on the second floor and the office window faced north. Each time I entered my office (a long narrow room) the window at the opposite end provided a splendid, framed view of the cupola on top of Hill Hall against the beautiful Carolina blue sky. In the fall when the trees turned flaming red and gold, the view was breathtaking. Even now, more than three decades later, I remember that view like it was yesterday.

New West underwent renovations sometime after I graduated in 1986. I wonder if anyone today enjoys that view that I loved so many years ago.”

I recognize the conductor—despite a long-hair wig—because it is I. This would have been in 1974 or 1975, I think. I was a musicology graduate student there and was also a teaching fellow. The car concert was a performance of a real piece, called “Car Bibbe,” by Al Hansen (named after his daughter, Bibbe). It is what is called aleatoric music, where the music results from largely random events, in this case honks, revs of engines, door slamming, etc., any sound that can be made with a car. Hansen created the “experience” in 1958-59 and provided a script for the activity. As I recall, we actually made a score that imposed some occasional order on when events started and ended, and I cued entrances of the “instruments.” Obviously, with the wig and the crash helmet we played it for humor, but it was also a genuine introduction to non-traditional music.