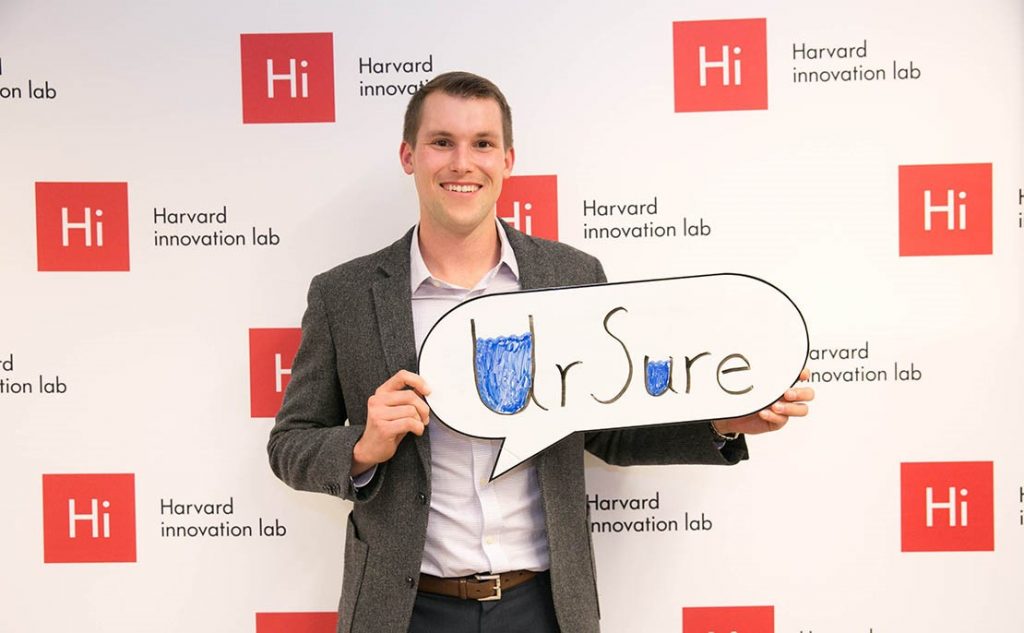 The things we might accomplish if we didn’t spend our free time binge-watching TV serials or playing Pokémon Go and instead used our discretionary time like Giffin Daughtridge did. He devoted the leftover minutes of his day — while attending medical school in one state and pursuing a master’s degree in another — to inventing a medical diagnostic test and turning it into a business.

Daughtridge ’11 and his business partner, Helen Koenig, won Harvard Business School’s 2016 New Venture Competition in April for UrSure Inc., their startup that offers a urine test they developed that can determine whether at-risk men are taking the drug PrEP daily to protect themselves from contracting HIV.

“In some circles, people don’t think HIV is a big issue because it’s no longer a death sentence; it’s a chronic disease that can be managed,” Daughtridge said. “But it’s a huge problem; it’s very prevalent and very expensive. The opportunity to get this drug to the people who need it most and get them to continue taking it, that’s what has kept me going.”

UrSure has its roots in Daughtridge’s experiences as a Fulbright Scholar in Bogotá, Colombia, after he graduated from UNC with bachelor’s degrees in biology and Spanish. He credits Carolina for guiding him through the Fulbright selection process and ensuring that he submitted a competitive application.

While researching Hepatitis B vaccination rates in the Amazon, he learned that sex workers were not vaccinated for the sexually transmitted disease. In his free time, he started a vaccination program with the secretary of health in Bogotá and a nonprofit to vaccinate sex workers against Hepatitis B.

Upon returning to the United States, Daughtridge enrolled in medical school at the University of Pennsylvania and commenced a master’s in public policy at Harvard’s Kennedy School of Government. While at Penn, he crossed paths with Koenig, a physician who specializes in HIV. The two started an HIV prevention program in Philadelphia, distributing PrEP. But to validate the efficacy of the program, they needed to know whether participants were taking the medication regularly enough to protect against infection.

“You have to take the pill every single day for it to be maximally effective,” Daughtridge said. “Taking a daily medication is very difficult. I’ve done it, and I’ve had a lot of trouble with it.” Daughtridge was diagnosed with testicular cancer as a teenager. The care he and his family received from his surgeon influenced him to pursue a career in medicine.

The average rate of adherence to PrEP in the United States ranges from 20 percent to 40 percent. The program Daughtridge and Koenig started in Philadelphia, where they field-tested and continue to use UrSure, has an 80 percent adherence rate.

Neither Daughtridge nor Koenig had business experience, yet the venture competition required them to submit a business plan. Daughtridge took an entrepreneurial finance class at Harvard, then took online courses in finance management, operations, and marketing and sales so he could “at least speak the language” when pitching UrSure to venture capitalists.

Daughtridge and Koenig are using the $50,000 prize money from the New Venture Competition to begin developing a point-of-care test, similar to a home pregnancy test that gives an immediate answer. Their current test requires that specimens be processed at a lab, and it takes a few days to get the results.

Next May, Daughtridge will graduate with his M.D. and a master’s in public policy. Rather than pursue a residency that would enable him to practice as a physician, he plans to work full time to grow UrSure.

“We’ve had great traction lately,” Daughtridge said. “I get the most excitement and fulfillment out of working on the startup and approaching health care from the entrepreneurship and policy side.”

Imagine what he can do with more than just his spare time.