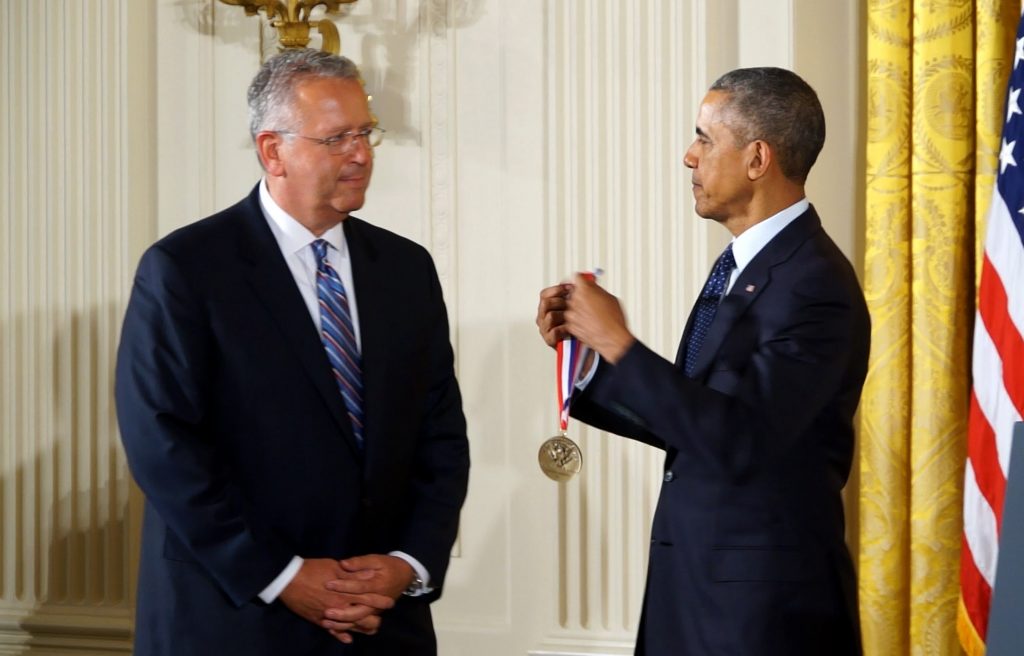 Joseph DeSimone was awarded the National Medal of Technology and Innovation by President Barack Obama. (photo by Carly Swain).

‘That fearless spirit of innovation’

With every innovation — the engineering of a drug-eluding heart stent, the creation of new 3-D printing methods, revolutionizing the development of next-generation vaccines and medicines — the ability to apply his work to the real world and make an impact on lives has always been the focal point.

“For us, it’s all about serving and doing,” said DeSimone, Chancellor’s Eminent Professor of Chemistry in the University of North Carolina at Chapel Hill’s College of Arts and Sciences. “You can do a lot of things in a laboratory, but if it doesn’t get outside the lab, it really doesn’t do anyone any good. So we’re very interested in trying to find better and more effective ways for taking what we do in the lab and trying to impact people, improve their lives and increase their livelihood and create jobs.”

On May 19, DeSimone’s years of innovative and beneficial work in material science was honored by President Barack Obama with the National Medal of Technology and Innovation. DeSimone’s citation also recognized his innovation and inclusive leadership in higher education and entrepreneurship.

“It’s humbling and exciting,” said DeSimone, who is also William R. Kenan Jr. Distinguished Professor of Chemical Engineering at NC State University and of Chemistry at Carolina. “It’s surreal. It certainly adds wind to the sail. I think there’s still so much to do, and this is not a point to look back.”

The country’s highest award for technology and innovation, the medal was created by statute in 1980 and is administered for the White House by the U.S. Department of Commerce’s Patent and Trademark Office. The award recognizes those who have made lasting contributions to America’s competitiveness and quality of life and helped strengthen the Nation’s technological workforce. A distinguished independent committee representing the private and public sectors submits recommendations to the President.

“As president, I’m honored to award each of you for your contributions to our nation,” Obama told the recipients. “As an American, I’m proud of everything you’ve done to contribute to that fearless spirit of innovation that’s made us who we are and doesn’t just benefit our citizens, but benefit the world. We’re very proud of what you’ve done.

“Its not just the winner of the Super Bowl or the NCAA tournament that deserves a celebration. We want the winners of science fairs, we want those who have invented products and life-saving medicines and who are engineering our future to be celebrated as well.”

Among those at the White House for the award ceremony was Carolina Chancellor Carol L. Folt.

“As a scientist whose career has flourished both in the private sector and academia, Joe DeSimone embodies the very best of American ingenuity,” she said. “His innovations have begun to transform industries as varied as precision medicine, energy storage and advanced manufacturing  — all made possible by his collaborations with faculty, students and industry. We congratulate him on this very fitting award.”

From inventing environmentally safe processes to making everyday materials such as detergents and dry cleaning to creating the world’s most sophisticated 3-D printer using light and oxygen to continuously fuse objects together from liquid materials, it has been through his expertise of polymer science — his “toolbox” — that has helped DeSimone develop and craft the technologies for which he was awarded.

But he is quick note that he didn’t do it on his own. The award, he said, is a “huge testimony” to students in his lab, faculty colleagues and the entrepreneurial culture at Carolina.