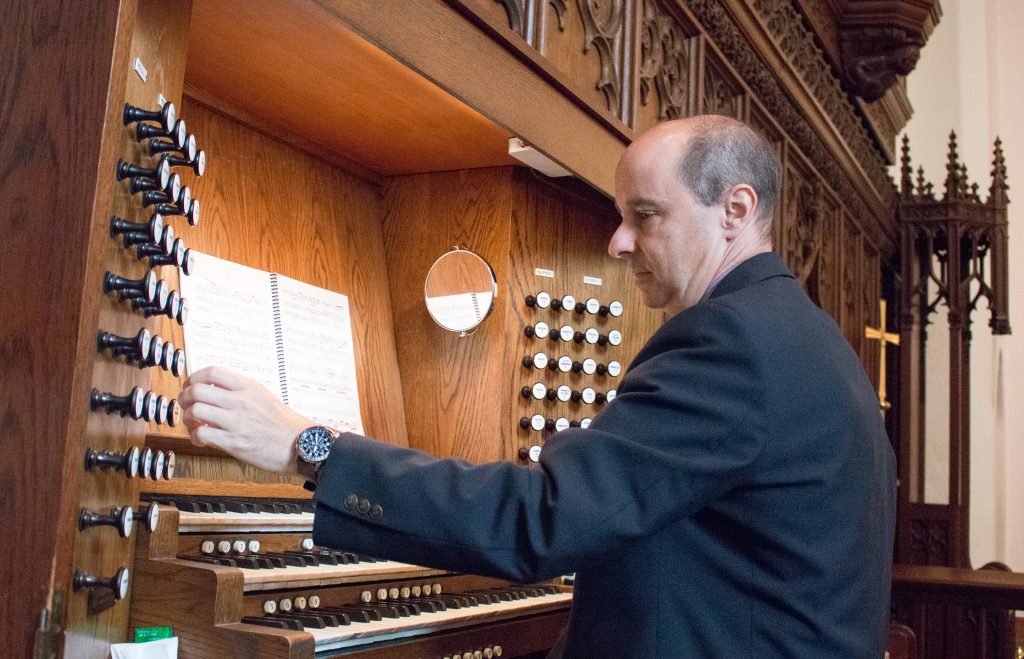 Andy Lang plays the organ in Chapel of the Cross on Franklin Street. He says music brings balance to his technology-intensive life. (photo by Kristen Chavez)

Watch a video clip of Andy Lang playing the organ.

Introducing Artists After Hours, an occasional feature in which we interview faculty, staff and students who pursue artistic avocations in areas not directly related to their day jobs and studies. Profiles are archived at our Carolina’s Human Heart website, celebratehumanities.unc.edu.

As director of OASIS, I lead a group of about 25 information technology professionals in the College of Arts and Sciences who focus on direct client support, systems administration, web and application development, and instructional technology.

When I was a kid, I fell in love with the organ by watching our parish organist play. I remember being in awe over his ability to operate this really complex instrument and being amazed by the variety of sounds he could produce by it. Were it not for his example and encouragement, I often wonder if I would’ve still been so serious about this instrument.

I started out on the piano when I was 7 and then transitioned to the organ around age 12.  I continued to study the organ as an undergraduate and later went on to get a master’s in music in organ performance. I continue to build my repertoire and skills by occasionally traveling to the University of Michigan to study with one of the best teachers in the country. And I just returned from the International Organ Academy in Haarlem, the Netherlands, where I studied 19th-century French repertoire from an expert in the field.

I’ve been very fortunate to play at some great venues, such as Washington National Cathedral and at various locations in Europe, including the Notre Dame Cathedral. For a week in the summer of 2015, I was in Toulouse, France, where I had unrestricted access to a really important historical instrument in the Basilica of St. Sernin.

About 15 years ago, I decided to take up the flute as a secondary instrument.  While I like the sound and the repertoire of the flute on its own, the organ might be thought of as a collection of flutes, and so in some ways learning the flute helps me to get closer to the organ’s innate character.

I also have an interest in gymnastics. This is something I have wanted to do since I was a child. Eight years ago, I looked in the mirror and said, “I need to do this.” Since then I’ve gotten involved in the gymnastics club here at UNC, which is a co-ed group of folks at all skill levels. Besides practicing our skills, we compete with other schools. I don’t compete myself, but because others keep encouraging me to do so, I just might someday. More recently, I volunteer as a scorekeeper at varsity team meets, so come and look for me at our home meets in Carmichael Arena!

I view my interest in gymnastics as a kind of analog to why I took up the flute. Just as I was drawn to the flute by its beauty and nuance, I think gymnastics can be the same way when it’s done really well. I’ve learned that when you attempt to do something that you admire, even if you never become any good at it, the level of your appreciation for someone who does it really well increases dramatically.

For me, life is all about balance. This is why I enjoy so many things outside technology. I think that if I were to do just technology, I would feel out of balance; similarly, if I were to do just music, I wouldn’t feel balanced either. And where the arts are concerned, being involved gives you an unfettered avenue for creativity that can only benefit all the other aspects of your life.  It really does represent a good way to live.

Know someone we should feature? Send suggestions to college-news@unc.edu.