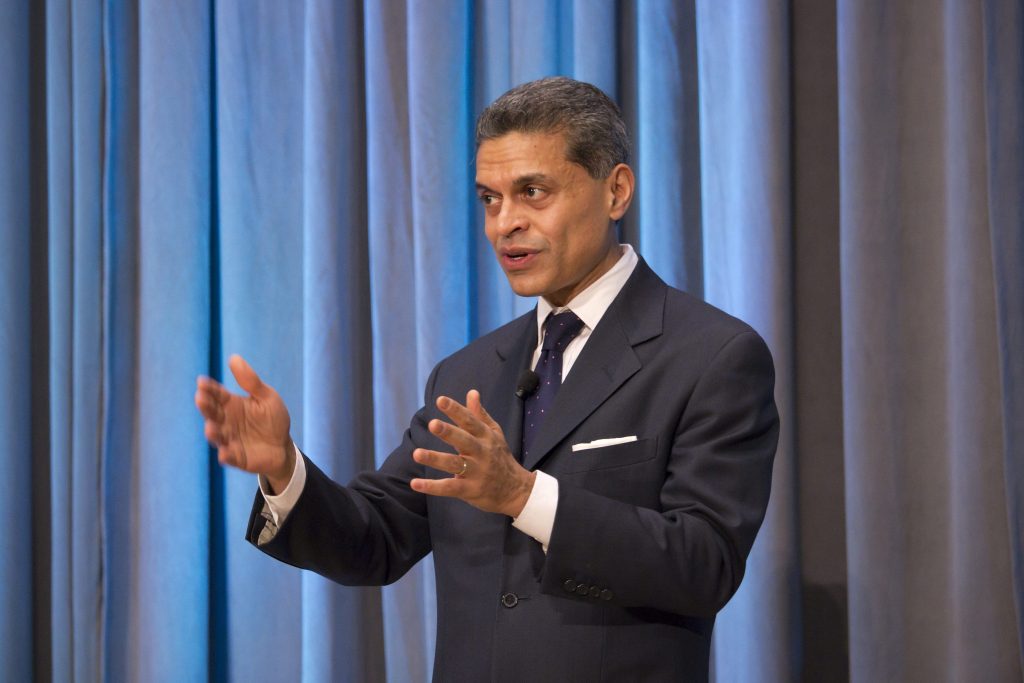 Fareed Zakaria told a packed auditorium at the College’s Frey lecture that the United States leads the world in higher education. (photo by Kristen Chavez)

Zakaria calls for a renewed commitment to higher education

Despite fears that higher education in the United States is in decline, CNN host Fareed Zakaria told a packed auditorium at UNC-Chapel Hill that he is extremely optimistic about the future.

“You hear that you’re not going to be able to get jobs, you’ll be saddled with mountains of debt, the whole thing is a scam,” Zakaria said March 8. “Yet when I look around the world and ask, what industries does the United States lead the world in? Information technology is one, but outside of that, there is only one industry that the United States has a clear commanding dominance in— and that’s higher education. If you look at the list of the top 10 universities in the world, eight are American.”

Zakaria delivered the Frey Foundation Distinguished Visiting Professor Lecture, sponsored by the College of Arts and Sciences, on the topic of his New York Times best-selling book, In Defense of a Liberal Education.

Chancellor Carol L. Folt, who introduced Zakaria, said she found the large student turnout for the talk heartening. (The Genome Sciences Building auditorium was filled and some watched the lecture livestreamed into an overflow classroom.)

“We’re the first public university in America, deeply committed to the tradition of learning with breadth and depth, and an education that encompasses everything from the arts to the sciences to the social sciences to the humanities,” Folt said. “We believe this foundation makes for a truly global citizen.”

Zakaria is the Emmy-nominated host of CNN’s flagship international affairs program — “Fareed Zakaria GPS” — a Washington Post columnist and a contributing editor to The Atlantic. Born in India, he received a B.A. from Yale College and a Ph.D. from Harvard University.

In his book, Zakaria argues for a renewed commitment to a well-rounded education.

“Let me be clear: Science and technology are the defining characteristics of the world we live in. They are absolutely essential,” Zakaria said. “My argument is not that we need less science. My argument is that science alone cannot suffice to comprise the broad, deep education that the United States has always been very good at.”

“We teach people how to think, and that may turn out to be a more successful skill at succeeding in life,” he said.

Zakaria urged students in the audience to be optimistic and confident about the future.

“The most important thing for you to remember is that there are enormous challenges in the world for sure, but there are also enormous opportunities, and those opportunities allow for the solving or the amelioration of many of the challenges we face,” he said.

Kevin Guskiewicz, dean of the College of Arts and Sciences, said he is a big fan of Zakaria and his book.

“I read it shortly after it came out last year and have referenced it on countless occasions,” he said. “In many ways, it’s a roadmap of the kind of education we are striving to provide in the College.”

The Frey Foundation Distinguished Visiting Professorship was established in 1989 in the College to bring distinguished leaders from government, public policy, international affairs and the arts to campus to discuss topics of major significance. UNC alumnus David Gardner Frey (B.A. ’64, J.D. ’67) chairs the foundation.