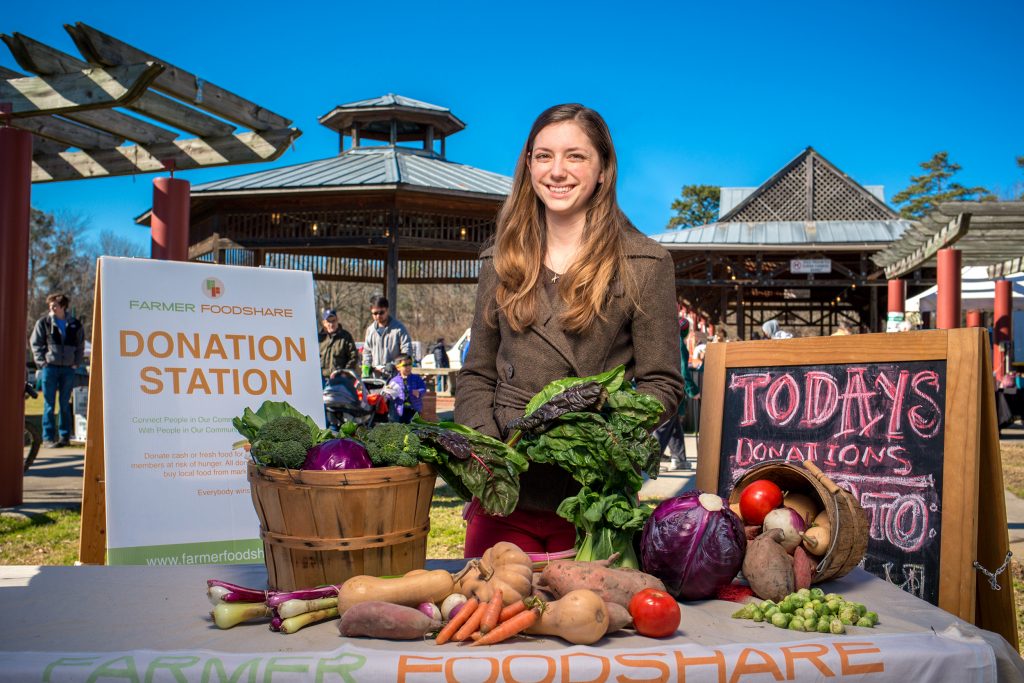 From Farms to Food Banks

North Carolina’s Triangle area has cultivated a foodie paradise of sustainable farms, growers’ markets and seasonal cuisine. But there’s a gap in the local food chain: Low-income households often lack fresh, healthy produce. And nearly one in five residents statewide sometimes go hungry, according to the U.S. Department of Agriculture.

UNC College alumna Gini Bell (Spanish/linguistics ’08) is helping to narrow the nutrition gap by forging new links from farm to food bank. As executive director of Farmer Foodshare, a Durham-based nonprofit, she oversees a network of community partnerships “connecting people who grow food with people who need food.”

Farmer Foodshare buys produce from local farmers and delivers it to food organizations that provide groceries and meals to those in need.

Bell’s interest in fresh local food sprouted when she was an undergraduate. She read up on environmental and health concerns associated with commodity farming and junk-food diets. She explored alternatives, including the student-run community vegetable garden on campus.

After graduating from UNC, she took courses on sustainable farming and food justice at Central Carolina Community College in Pittsboro. She worked with two local food-shed pioneers: farmer Ken Dawson, who co-founded Maple Spring Gardens in 1972, and Lex Alexander, who in 1981 co-founded Durham’s Wellspring Grocery, now part of the Whole Foods Market chain.

“I learned a lot about fresh local food, including who has access to it and who doesn’t,” Bell said. “I began thinking more about how food moves from where it grows to where it is consumed.”

The critical thinking skills Bell honed at Carolina kept her digging for solutions. She found bold initiatives sprouting at Farmer Foodshare. The nonprofit was established in 2009 by Margaret Gifford, a shopper at the Carrboro Farmers’ Market who began gathering surplus food from growers and donating it to local food banks. Soon Gifford realized she could collect contributions from other shoppers to pay the farmers for their food. That effort evolved into the unique model that now partners with a network of local farms and food agencies across the region to take a whole-systems approach to food access.

Bell started working for Farmer Foodshare in January 2013 and became executive director a year and a half later.

“It’s a joy to find innovative ways to address big issues by tapping into the strengths of so many smart people working together across our community,” she said.

Bell collaborates with four staffers, including two other UNC alumnae: Katy Phillips (psychology ’99) and Karla Capacetti (environmental studies ’11). With the help of Carolina student interns and dozens of volunteers, they provide a series of programs, including:

POP (Pennies on the Pound) Market: To respond to increasing demand, Farmer Foodshare created a centralized hub to buy fresh food in bulk. Each week, farmers list what they have available, and about 36 food relief organizations place orders. A Farmer Foodshare van transports the produce from the farms to the warehouse for filling orders.

Food Ambassadors: Farmer Foodshare volunteers give cooking demonstrations at markets, food agencies and other locations to show consumers how to prepare produce in new ways or cook with unfamiliar vegetables.

We continue our coverage of UNC’s “Food for All” theme in this issue. Learn more at foodforall.web.unc.edu and read more stories.