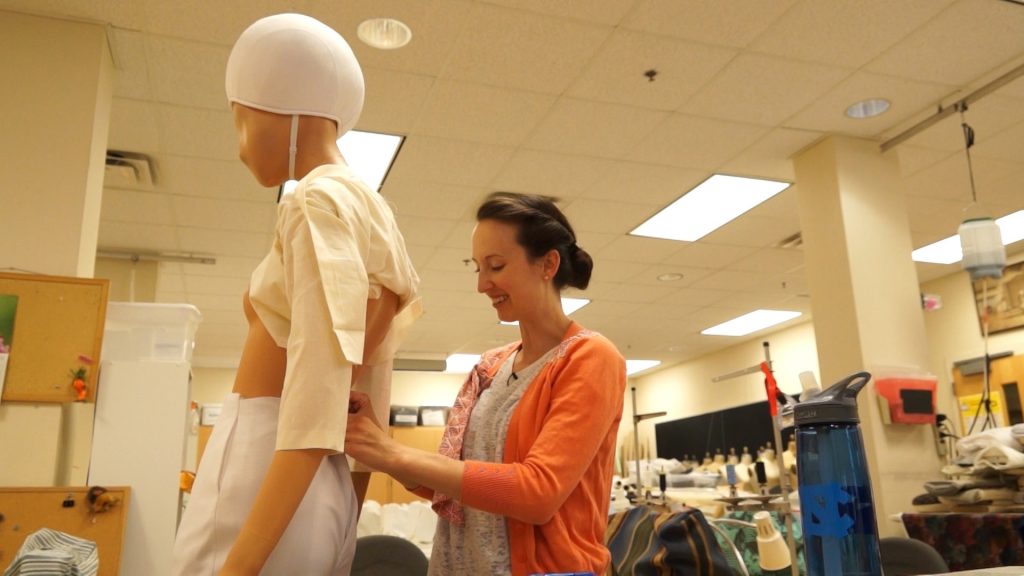 With hours of hand-sewing and creative crafting, Carolina’s graduate costume production students are working their way onto a platform even bigger than the stage.

The Washington, D.C.-based Museum of Science Fiction was in its early developmental stages when Steve Dreyer was tasked with finding precise costume replicas from famous science-fiction feature films and television shows. Dreyer and the museum found what they needed in the dramatic art department in UNC’s College of Arts and Sciences.

Graduate costume production students were tasked with creating two replicas that will go into pop-up museum exhibits. Those replicas will eventually find a home in a brick-and-mortar museum.

First on the production line was a flight attendant suit from the film 2001: A Space Odyssey.

Graduate student Denise Chukhina handcrafted the replica with a process that included designing mock-ups, cutting and stitching the fabric, and creating shoes from scratch. One new tool, however, proved to be a time machine of sorts: the makerspace 3-D printing lab at the Kenan Science Library.

Instructor and costume crafts artisan Rachel Pollock said recreating the Pan Am medallion on the flight attendant’s turban would have taken hours of tedious labor. But with the help of librarians at makerspace, 3-D printers churned out the piece in a matter of minutes.

Sci-fi artifacts debuted in July at a pop-up exhibit at Reagan National Airport in Arlington, Va.

Students have more time to artfully fashion a stillsuit replica from the film Dune. That project is slated for completion in summer 2016.

Text and video by Carly Swain