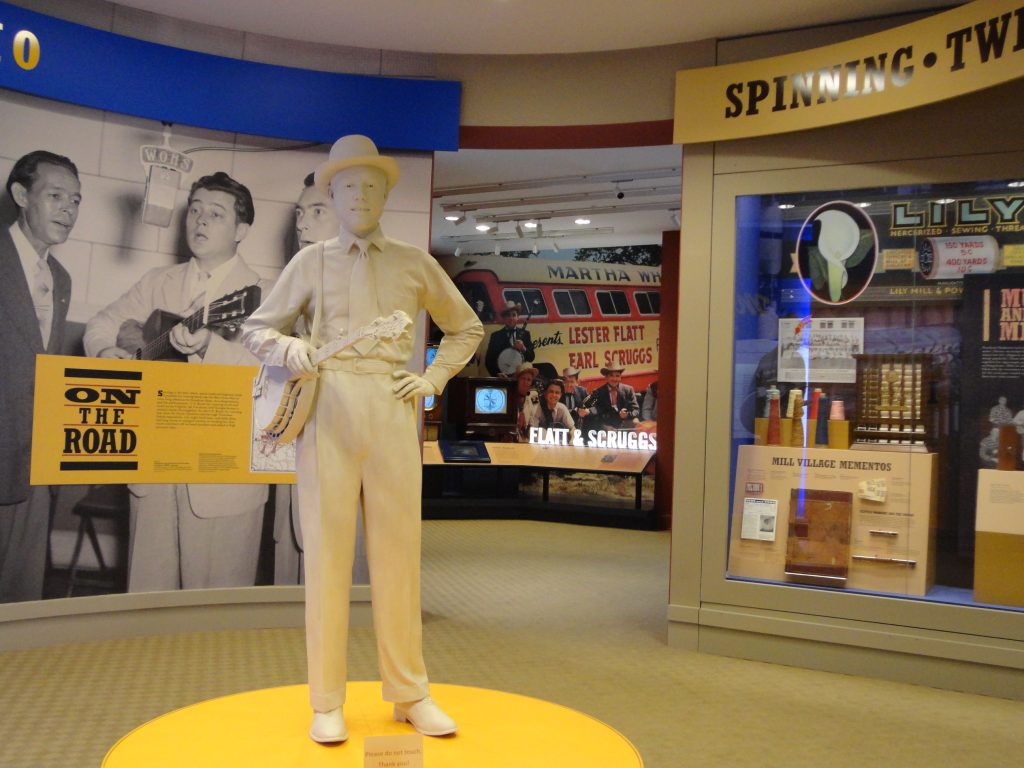 Visitors to the new Earl Scruggs Center, nestled in the renovated 1907 courthouse in uptown Shelby, N.C., can immerse themselves in the life of the late banjo player and bluegrass pioneer who grew up in the nearby Flint Hill community.

They can watch footage of Lester Flatt and Earl Scruggs in the 1960s sitcom The Beverly Hillbillies. Hear artists Steve Martin and Béla Fleck on film talking about the influence Scruggs has had on their careers. Learn about the impact of textile mills and cotton farming on Cleveland County. Interact with a large touch table to start a musical “picking party.” Record an oral history.

The museum, about an hour from downtown Charlotte, opened in January with a celebration and concert featuring Travis Tritt, Vince Gill, Sam Bush and others. UNC faculty, students and alumni are playing a key role in this cultural tourism project that organizers hope will be an economic boon to the western North Carolina region.

As proof that Carolina ties run deep, it was a serendipitous Tar Heel encounter in October 2006 on a plane coming back from Nashville, Tenn., that got the whole project started.

Brownie Plaster is the chair of Destination Cleveland County, the volunteer-driven, public-private partnership that spearheaded the development of the Scruggs Center and the Don Gibson Theatre (named in honor of the singer/songwriter who is also a native son). The theater opened first, in a renovated Art Deco movie house a few blocks from the Scruggs museum. On her way home after a visit with Earl Scruggs, Plaster was seated next to UNC alumnus Peter Hartman ’75 who told her that Carolina blues historian Bill Ferris might be able to help her.

In 2007, Plaster met with Ferris, senior associate director of the Center for the Study of the American South in the College of Arts and Sciences. He arranged a second meeting with faculty, students and staff from history, folklore and the Southern Folklife Collection. Ferris and CSAS had consulted on a similar project, the B.B. King Museum and Delta Interpretive Center, in Indianola, Miss.

“The Center for the Study of the American South is a crossroads, a hearth where people can come to sit and talk and dream,” Ferris said. “We see part of our role as forging partnerships with grassroots projects like the Earl Scruggs museum that will help communities like Shelby revive economically. People want to learn about bluegrass and barbecue and gospel music, and North Carolina is rich in those traditions.”

Even though Scruggs passed away in 2012 before the museum opened, he was involved in the conception of the project and participated in filmed interviews that are a part of the museum’s collection.

An independent bookstore, restaurants, gift stores and coffee shops have opened near the court square, and the Scruggs Center is drawing visitors from as far away as Japan. Smoke on the Square, across the street, serves up sweet tea-brined pork chops, fried green tomato BLTs and livermush sandwiches for visitors hungry for local cuisine.

In 2008, Plaster’s organization hired a group of UNC folklore graduate students to do a “cultural inventory” to inform the Scruggs project. The students conducted oral histories of Cleveland County residents centered on four themes: textiles, music, the untold African-American story and the 21st-century narrative.

Another team of students did more interviews in 2010, and UNC’s Southern Oral History Program trained local volunteers to continue the work. This research helped project organizers gain a more authentic sense of the region’s rich history.

One of those graduate students, Brendan Greaves (M.A. folklore ’08), launched a new career based on his experience with the Scruggs project. In researching local musical culture, he stumbled upon David Lee, an African-American musician who owned Washington Sound, a record and stereo supply store. Lee also ran three independent record labels from the early ’60s through the late ’80s.

“At the time, Mr. Lee was 74 years old and retired. He had worked at a historically white country club for decades,” Greaves said. “What was notable about his work was that it reached across race and community in a pretty fascinating way. He worked with white, black, gospel and secular musicians.”

Greaves and UNC alumnus Jason Perlmutter ’03 launched a record label, Paradise of Bachelors, where they released rare, out-of-print recordings on Said I Had a Vision: Songs & Labels of David Lee, 1960-1988.

Today, Lee has a section in the Earl Scruggs museum, and Paradise of Bachelors has continued to release recordings of under-recognized and historical American vernacular musicians.

“What I’m doing today is a direct result of the folklore program at UNC,” Greaves said. “It instilled in me how to learn from the folks you are interviewing and how to take their stories at full value and honor them.”

Jeff Currie, who is working on a master’s thesis in folklore, also contributed to the Scruggs project. Currie is helping another state cultural tourism project, the Vollis Simpson Whirligig Park in Wilson, N.C., where organizers are restoring the larger-than-life sculptures of the late folk artist.

Currie’s Cleveland County fieldwork focused on life in the textile mills, specifically the Lily Mill where Scruggs worked at one time.

“The foundation of labor, how people get by in this world, really informs who they are and what their community is about,” Currie said. “Earl Scruggs had an opportunity and a talent and he wanted to get out of the mill, but coming from a mill family really informed who he was as a person.”

Museum organizers say it was important that they enrich visitors’ experiences by enhancing their understanding of the region where Scruggs lived; the center’s tag line is “Music and Stories from the American South.”

But beyond Scruggs’ roots, it was also critical to applaud his resiliency and to look at how he was always reinventing himself, Plaster said.

“One of his quotes in this building is: ‘You can’t encore the past. It’s done, done. You can’t sit on the bank and watch the boat pull off and leave you behind,’” she said.

UNC Board of Trustees Chair Lowry Caudill (B.S. chemistry ’79) grew up in Shelby, and his dad had been principal of Shelby High School. He calls the Earl Scruggs Center “a special project that clicks on so many levels.” Caudill, Ferris and other UNC faculty and alumni sit on the center’s advisory board.

“It’s a thoughtful idea, and it’s been incredibly well-executed,” Caudill said. “They wanted to do this in a top-drawer way. It had to be of great value to the people of Shelby and the county.”

Emily Epley, executive director of the Scruggs Center, said the museum worked with the Cleveland County Schools from the beginning to make the museum meaningful for schoolchildren.

“The kids love the exhibits. They don’t want to leave, and that’s a great thing,” she said, laughing. “How do we provide engaging experiences for the students while they are here, and in the classrooms before and after their experience? We have worked with teachers to design a website that will list all the educational resources and tie-ins to state curriculum standards.”

Caudill, who teaches in the College’s entrepreneurship minor, said the Scruggs project is a perfect blend of social, artistic and commercial entrepreneurship. It’s an innovative idea, and one he believes will be sustainable.

“UNC’s involvement brings a level of academic rigor and historical accuracy to it,” Caudill said. “And the project leaders have really thought through the economic model from the very beginning. They have to keep this at a very high level, and I’m absolutely convinced they will do that.”

J.T. Scruggs, a nephew of Earl Scruggs, is chair of the center and a member of the board of Destination Cleveland County. He said local restaurants and hotels are seeing an increase in business since the opening of the Don Gibson Theatre and the Scruggs museum.

“I can’t tell you how supportive UNC has been … [the University] really opened their doors to us,” he said. “What I have really enjoyed most about this is how we are keeping Earl’s legacy alive.”

The Earl Scruggs Center was featured on UNC-TV and in The New York Times.