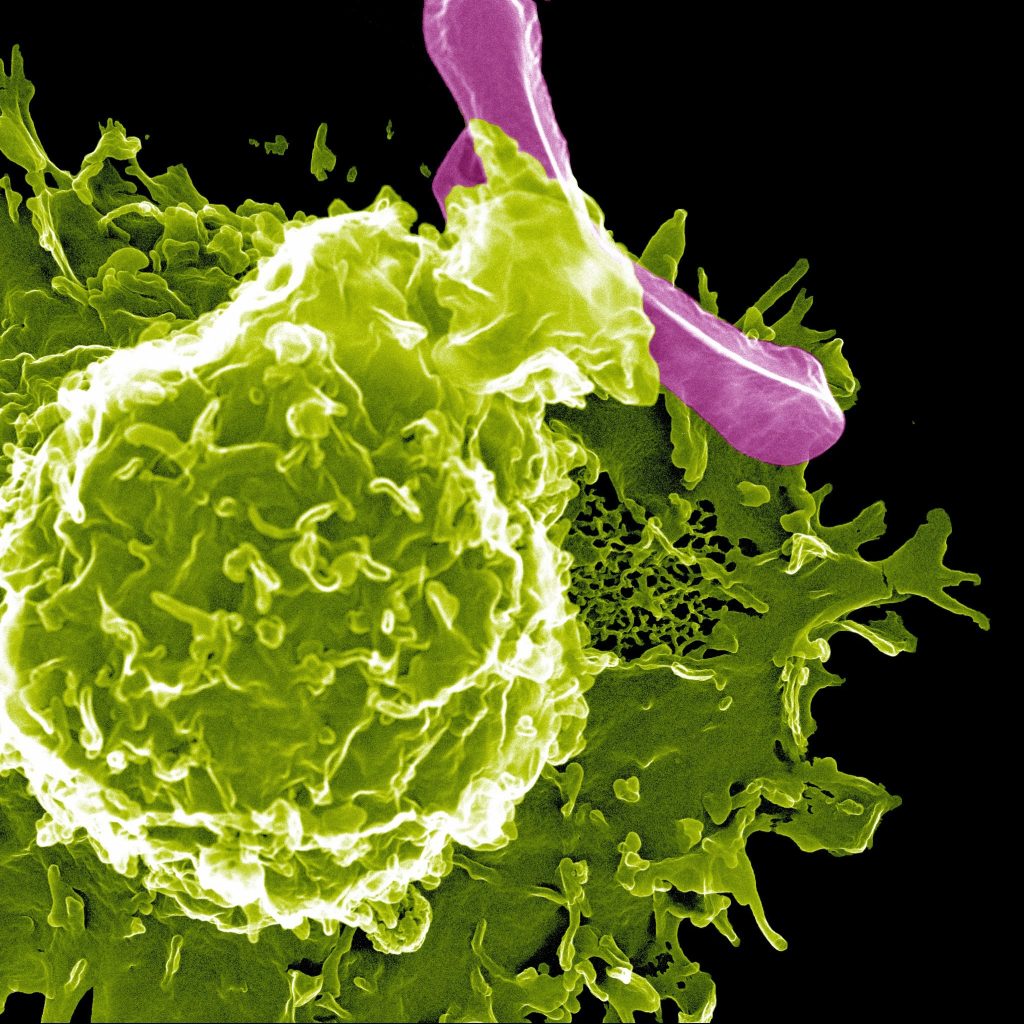 "Macrophage" by Tammy Shen and Jack Griffith. (Images with this story are from the annual CHANL scientific art competition.)

It is the first new science department in the College of Arts and Sciences in 40 years.

“Applied physical sciences inhabits the interdisciplinary space between science and engineering, bridging disciplines to translate ideas from basic science into real-world applications,” said Peter Mucha, chair of the department and Bowman and Gordon Gray Professor of Mathematics. “In this flexible setting, we are uniquely positioned to encourage more creative solutions that leverage other existing campus efforts.”

In 2011, Karen Gil, dean of the College, formed an interdisciplinary task force to develop a strategic plan to ensure that the University’s science programs could help Carolina become a global leader in scientific innovation. The new department unites existing entities on campus and harnesses their energies to work toward that collective goal.

The Chapel Hill Analytical and Nanofabrication Laboratory, which goes by the acronym CHANL, is an important part of the new department. The lab contains specialized equipment that is useful to researchers across many disciplines, including chemistry, physics and astronomy, biomedical engineering, pharmacy, environmental science and engineering, biology, marine sciences, medicine and dentistry.

CHANL is used by faculty and students at Carolina, neighboring institutions and startup companies in the Triangle. It is a hub for experimentation and discovery. Scott Warren and Michael Ramsey are among the 300 researchers who benefit from the lab’s instruments every year. (See stories below on Warren’s research into 2-D phosphorous sheets and Ramsey’s microfluidic research.)

The department will continue to expand its research facilities as it grows. Renovations are currently underway in Kenan Laboratories to provide more bench space for Warren and his team as well as future faculty members. Construction is slated to begin next spring in Murray Hall, where a Carolina CreatorSpace hub will offer undergraduates a place to learn, create and innovate.

Another key component of the new department is a graduate program in materials science, which emphasizes electronic, nano, polymer and biomaterials. Faculty from chemistry, physics and astronomy, and health sciences provide an interdisciplinary approach to materials, encouraging this next generation of problem-solvers. Mucha looks forward to offering an undergraduate major in the future.

“Many of today’s biggest challenges are related to health, energy and water,” Mucha said. “Through collaboration with some of UNC’s already significant investments in these areas, our new department is excited to confront these challenges and contribute to their solutions.”

Chemist and applied physical sciences professor Scott Warren thinks big by starting small: atom-sized small. His latest research project involves 2-D materials, such as sheets of elemental phosphorus that are only one-atom thick. With that and the similar materials he and his research group are creating, he sees possibilities for applications in purifying water and augmenting solar cell technology.

Scientists who developed the first 2-D material, carbon sheets, won a Nobel Prize for the discovery only six years later, an unprecedented feat in an arena that usually takes the better part of a career to prove a discovery’s impact. Warren and his group are working on only the second such element in 2-D form.

“We will be filing a patent soon on a new way to make 2-D phosphorus material,” Warren said.

Phosphorus binds strongly to metals and, because of the vast surface area of a 2-D material, can absorb a wide variety of metal contaminants, similar to the way a Brita carbon filter pulls lead out of tap water. The 2-D material is efficient in electron and ion transfer, so it could be used to purify water, build solar cells or batteries, or act as catalysts. Warren’s background in nanoparticle electronics helps him conceptualize the material’s usefulness in energy conversion.

Warren sees the applied physical sciences department as building a bridge between the sciences and the UNC School of Medicine, for instance, creating pathways for discoveries such as painless microneedles that deliver vaccines and chemotherapy while reducing the risk of infection from a traditional shot.

Recently, Warren put together a grant proposal that has been funded and will bring together about 20 faculty members from the dental and pharmacy schools and the geology, physics and chemistry departments.

“With this proposal, I saw that the divisions between departments at UNC is quite small,” he said. “That doesn’t happen everywhere, that faculty are willing to work together to do something big.

“Creating new ideas and making an impact on the world through research happens best where there aren’t artificial boundaries that prevent people from sharing ideas.”

Michael Ramsey’s research group has moved one step closer to replicating a Star Trek-like tricorder, the handheld device Mr. Spock used when he beamed to a new planet to determine whether or not it was safe. The tool Ramsey’s lab has invented will let soldiers quickly check for airborne chemical agents and enable firefighters to analyze fumes at a fire scene for toxicity.

The device is at the core of 908 Devices, Ramsey’s second startup, which he formed nearly three years ago. His first, Caliper Life Sciences, was purchased in 2011 by PerkinElmer for $650 million. He has begun talking with investors about his plans for additional startups based upon other technologies being developed in his laboratory.

Ramsey is the Minnie N. Goldby Distinguished Professor of Chemistry, on the faculty of the biomedical engineering and applied physical sciences departments and a member of the Carolina Center for Genome Sciences. This year he was elected to the National Academy of Engineering, one of the highest professional distinctions awarded to a scientist or engineer.

“I am indeed an applied scientist,” he said. “I believe we should be working on projects that will generate products people actually use and that fulfill unmet societal needs.”

Ramsey focuses on microfluidic circuitry, which he coined as “lab-on-a-chip technology” more than 20 years ago because the tiny conduits, thinner than a human hair, enable him to conduct experiments using miniscule samples of chemicals rather than having enough to fill a test tube. The minute sample size lowers the cost of medical diagnostics and makes drug discovery more efficient.

Much of Ramsey’s current funding comes from the U.S. Department of Defense and the National Institutes of Health. His tricorder-type device miniaturizes a bulky mass spectrometer that typically weighs hundreds of pounds. The next startups he hopes to launch will focus on miniaturized technologies that address clinical diagnostic measurements — devices that perform sophisticated biochemical assays to screen for multiple diseases from very small sample sizes, such as a drop of blood.

“It is relatively easy to form a company; the hard part is to create and sell products and generate revenue from those companies — that’s the measure of success,” Ramsey said.

Rich Superfine will know that Carolina CreatorSpaces, a revolutionary network of “maker spaces,” has succeeded when the spaces are packed the night before Halloween with students making costumes, adding LEDs and attaching circuitry to make things whirl or smoke.

Superfine, the Taylor-Williams Distinguished Professor of Physics and Astronomy, wants all students — creative types and technocrats and science geeks — to own the spaces. Having students from different perspectives in the same room where they can interact with one other could lead to breakthroughs that result in innovative solutions to real-world problems.

Students and faculty from the arts, humanities, natural and health sciences have been involved in the planning for these Carolina CreatorSpaces.

The spaces, a major project of the new applied physical sciences department, will be organized with a central hub in Murray Hall and pockets of innovation scattered throughout campus. Kenan Science Library in Venable Hall will be renovated to make room for 3-D printers and collaborator space; a studio in Hanes Art Center will be outfitted as a maker space with power tools, 3-D printers and scanners; and Morehead Planetarium and Science Center is building a kid’s maker space where schoolchildren who visit by the busload can learn the fun of building robots and gizmos. Plans are now underway for a fabrication shop with machines for woodworking, metalworking and laser cutting; an electronics and robotics lab; even a room with textiles and sewing machines. Students will be trained on how to use the resources and be connected to entrepreneurs-in-residence and workshops on launching a business.

“The departments of dramatic art, communication studies, biomedical engineering and computer science will all have a relationship within the CreatorSpace networks,” Superfine said.

“Students will be challenged and have the resources to start solving problems from the moment they land on campus,” he said. Ideas will turn into inventions that can be used to solve some of the greatest challenges of our time: insufficient clean water and energy, stagnant or polarized economies and the achievement gap.

The spaces will be used for classroom projects, entrepreneurial ventures or just to have fun. Student diversity will enhance creativity.

“Comic-Con kids staying up late making their Halloween costumes will rub shoulders with engineering students,” Superfine said. “That’s when you get ideas like an artificial pancreas that can be made to look like a Spider-Man tool belt, and all of a sudden some school kid who was embarrassed by his [medical condition] becomes the envy of his classmates.”