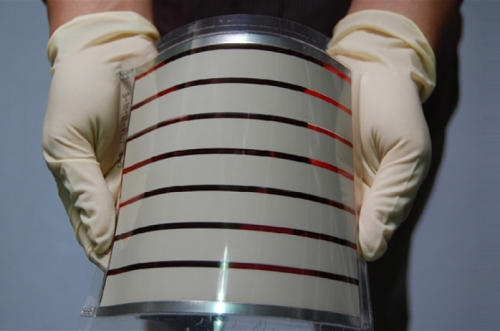 UNC scientists are trying to find ways to bring the price of solar energy down, and make solar-power devices more practical for much wider use.

Most solar cells on the market today are made with costly silicon. Chemist Wei You and Physicist Rene Lopez are experimenting with polymers, or plastics, to see if they can provide a cost-efficient replacement for silicon in solar cells.

Plastic is cheaper than silicon and can be manipulated to convert absorbed sunlight into electricity. The key will be figuring out the right chemical configurations of polymers to create electricity efficiently.

Lopez has experimented with many different solar-technology materials, including polymers, de-sensitized solar cells, and quantum dots. Polymers aren’t the most efficient, but so far they seem like the least expensive to mass produce.

Polymers are also lighter and they won’t fracture like the heavy, brittle silicon cells used in many solar energy panels. Some solar products already on the market are flexible and lightweight, but they’re still costly and don’t put out a lot of power.

You’s team wants to build solar cells that can roll up like posters for easy packing and portability, while also providing enough power for anything from a camping trip to a military operation. They also want to make their new solar cell the first one that comes with a built-in battery, for storing power when the sun is down.

You plans for the active part of the solar cell to be less than 500 nanometers thick. That’s one-twentieth of one millimeter.

A big advantage of this kind of solar cell is that the polymers are processed in a liquid, opening up the possibility to cheaply mass-produce solar cells by printing them onto plastic, much like printing a design on a T-shirt.

This idea has attracted the attention of Solarmer Energy, an organic-photovoltaics company that has the technology to print these types of cells. The company will collaborate with labs at UNC and Duke to make sure the new cell design can be mass-produced with Solarmer’s technology.

[ Excerpted with permission from a story by Susan Hardy in Endeavors magazine.]

Read another story about solar research.