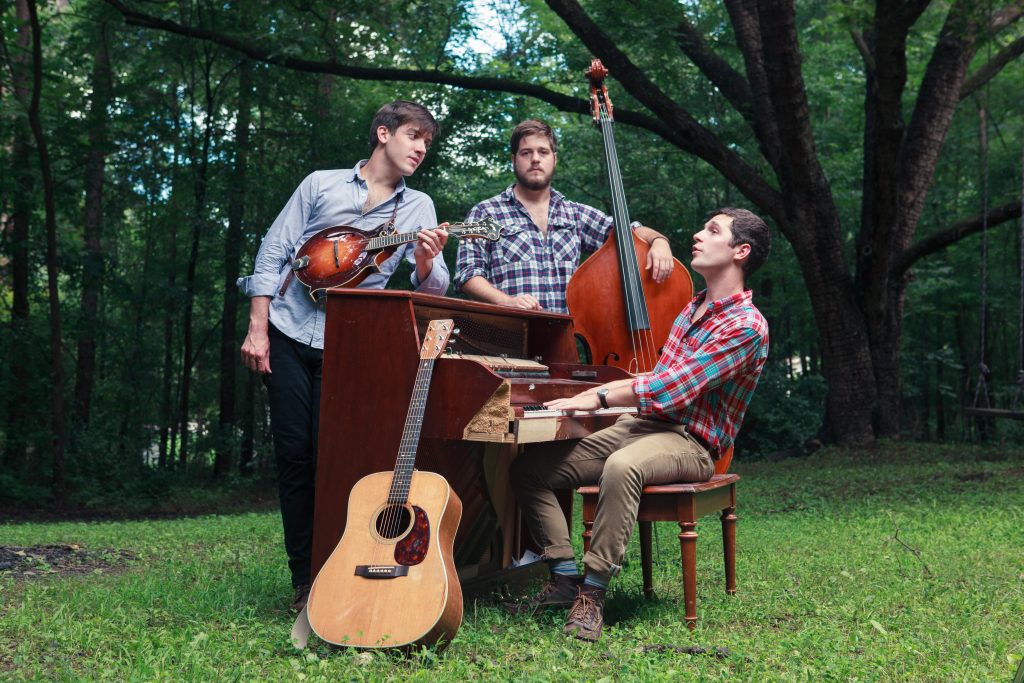 The southern string band Mipso, made up of 2013 UNC alums Joseph Terrell on guitar, Jacob Sharp on mandolin and Wood Robinson on double bass, are going to be putting a lot of miles on their Subaru this spring.

The North Carolina natives with the sweet harmonies are on tour again after the success of their second album, “Dark Holler Pop,” which was released last fall. It landed at No. 8 on Billboard magazine’s bluegrass charts.

Terrell and Sharp, Morehead-Cain Scholars, first met during a college visit trip after they were admitted to UNC. Later Terrell and Robinson played together in a rock cover band called Funkasaurus Rex. The three eventually joined up their sophomore year, and the best friends all enrolled in creative writing professor Bland Simpson’s “Collaboration: Composers and Lyricists” class during the spring of their senior year. Music professor Mark Katz was Terrell’s thesis adviser.

Perhaps surprisingly, none of them are music majors. Terrell received degrees in religious studies and cultural studies, Robinson pursued geology and environmental science, and Sharp majored in geography and global studies.

“Our degrees taught us about the world we’re living in, and how to solve problems,” Sharp says. We are doing that in music, but we could have done a wide variety of things and have been equally prepared.”

Both Terrell and Sharp had also taken lyric-writing classes with Simpson. But the collaboration class “was totally different,” says Terrell.

“What I took away from it was what it’s like to work with different people and how you can cross-pollinate ideas,” he says. “I had to work with people whose musical backgrounds were way different from mine.”

Shortly after commencement, the group spent a month in Japan and China and headlined at the third oldest bluegrass festival in the world in Japan. They made connections after Sharp spent the summer of 2012 doing undergraduate research on the bluegrass community in Japan.

“The concerts in China were some of our rowdiest times. In Shanghai we ended with a small crowd coming on stage and singing John Denver’s ‘Country Roads’ together,” Sharp says.

They took their friend, 2012 journalism major Jon Kasbe, with them and he made a documentary film, “Mipso in Japan,” about the trip. They plan on entering the film in about 70 festivals.

Despite their travels far and wide, you only have to listen to the song “Carolina Calling” on the new CD (or join the more than 20,000 viewers who have watched the video on YouTube) to know that their love for their alma mater and the Tar Heel State rings true.

“We get to make a living doing what a lot of people dream of doing,” says Robinson, who had just spent several hours in a coffee shop booking gigs. “It’s humbling to go to all of these incredible communities and feel as though you’re embraced as one of their own.”

Listen to the sweet sounds of “Carolina Calling.”

Listen to Mipso play in the “music in the lobby” series at Our State magazine.

Read a unc.edu story on Mipso.