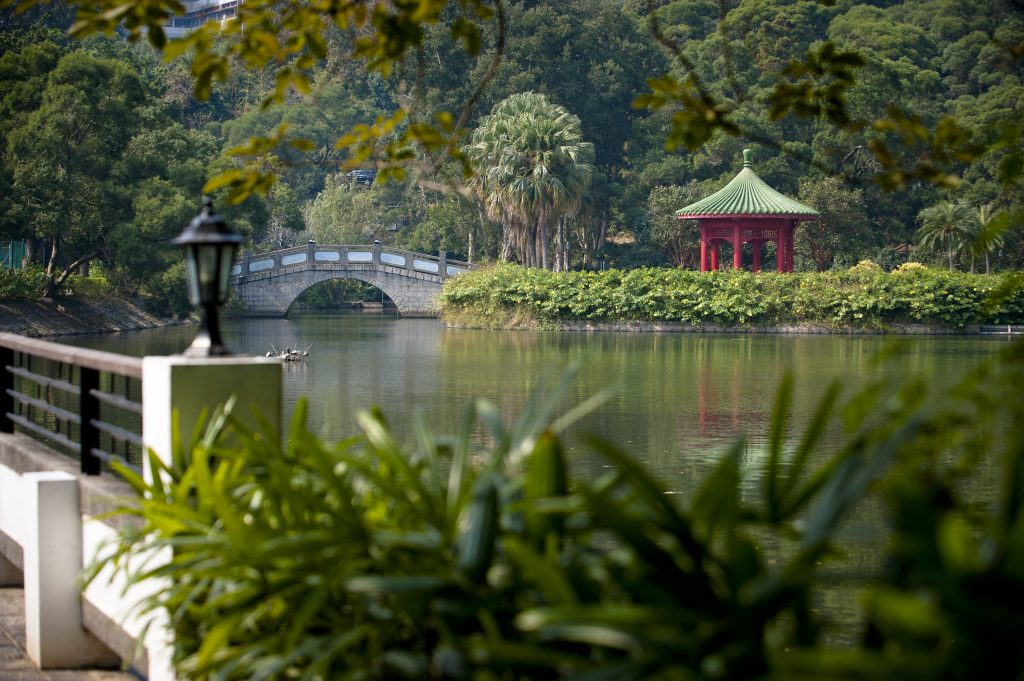 Weiyuan Lake at the Chinese University of Hong Kong.

At the end of her first year at Carolina, Jashawnna Gladney ’16 had never been out of the country or even flown on an airplane. The Thomasville, N.C., native was eager to see the world. (Read a companion story, about student experiences in Singapore.)

Her dream came true last June when she boarded a jet in Raleigh for a 17-hour trip halfway around the planet to a leading global financial hub in one of the world’s fastest growing regions. She had won a competitive Hong Kong Alumni Club Study Abroad Scholarship [ see sidebar at end of story] and would spend five weeks in an international program at Chinese University of Hong Kong, followed by two weeks teaching English to adolescents on the coast of mainland China.

“It was by far the best experience of my life,” she said of the summer of 2013. “It was fascinating — the cultural differences, the food, the opportunity to learn about it all while living there.”

She lived and studied on a modern verdant campus with students from Hong Kong, mainland China and all over the world.  She took classes in traditional Chinese medicine and Chinese philosophy.

She saw firsthand how Chinese doctors employed both Chinese medicine and western practices. She visited an herbal medicine garden and a hospital, and was given the chance to practice acupuncture and learn about the 29 different pulses in Chinese medicine.

Gladney also enjoyed cultural field trips that revealed Hong Kong as a place where East and West intersect in surprising ways.  She and classmates visited nearby Lan Tau Island west of the bustling city. There they stopped at Tai O, a picturesque traditional fishing village, where houses are built on stilts directly over the sea. The students also trekked up 260 steps to see the world’s largest outdoor seated Buddha statue at the ridge-top Po Lin monastery complex on the same island. To reach this sacred icon visitors are directed past souvenir stands, eateries and billboards hawking competitive commercial ad space.

Gladney also got to see what life is like in rural China. She volunteered to teach two classes, a total of about 40 students, age 10-16,, at a local school in the Fujian Province. They had been studying English since they started elementary school, so her job was to encourage them to converse more confidently. “We taught them American games and songs, such as Hokey Pokey,” she said, to help them incorporate English words.

All of these experiences had a profound effect on Gladney. “I’ve changed,” she said. “I’m much more globally and culturally aware.”

Back at UNC she is focusing her studies on her new interest in combining public health, education and policy, she said, “to make a difference in the world.”

Hong Kong holds a special appeal.  An exciting metropolis of 7 million people, it has a booming free-market economy with one of the highest per-capita incomes in the world.  As a former British colony, it pulses with a fusion of European and Asian influences evident in its architecture, cuisine, culture and politics. Residents of this “special administrative region,” enjoy more personal freedom than their counterparts in the rest of the People’s Republic of China.

Hong Kong attracts students who are curious about China, but may not speak the local languages. With clear, bilingual signs on streets and shops, and a mass transit system that is fast, clean and easy to navigate, students have no problems getting around.

The sub-tropical climate is especially appealing during the “winter” months. Students like to explore parks, trails and outdoor markets. They seek out hole-in-the-wall noodle shops, where a hearty meal may cost the equivalent of $3 in U.S. currency. Whether looking down from Victoria Peak, or across the harbor while riding the Star Ferry, they marvel at the neon skyline and laser light shows that illuminate Victoria Harbor.

Even shoppers on a student’s budget can find great deals on foot massages, Pashminas and jade jewelry, while evading street hawkers touting “handbags, watches, tailors” and more. On long weekends, students have plenty of time to explore disco and karaoke, hop a train to adjacent mainland China, or board a cheap flight to other Asian cities.

Established in 1963, Chinese University of Hong Kong is a first-rate, comprehensive research institution with about 14,000 students and four Nobel laureates on its faculty.  It’s situated in the New Territories on the northern edge of Hong Kong. The campus features high-rise classrooms and residence halls, athletic fields, parks and trails spread across 335 acres on the side of a mountain, with stunning views of Tolo Harbor. It’s a comfortable place to study and to make friends with students from all over the world, away from the noise and crowds of the central city.

UNC students can select courses taught in English from a wide range of disciplines spanning the arts and sciences, business, law and engineering. They can also study Mandarin or Cantonese. They can take the MTR subway to a mega shopping mall or into town to explore nightlife, markets and eateries. Mainland China is only 40 minutes away by train.

Sarah Wilkey ’14, a UNC exercise and sport science major who grew up in Atlanta, enjoyed spending the spring term of her junior year at CUHK. She took five classes in geography of China, Hong Kong literature, the philosophy of life, statistics, and biomedical engineering. She especially enjoyed conducting biomechanical research at a nearby hospital laboratory, where she analyzed an ankle sprain basketball injury using a model-based image matching program.

“It was my first opportunity to conduct a research project like this,” she said. “I used new technology I had never used before, and worked in a hospital lab setting, in Hong Kong!”

She hopes that the work she did in Hong Kong will help her stand out when she applies to graduate school for biomechanics.

Founded in 1910, the University of Hong Kong (HKU), with 22,000 students, is considered one of the best English-language institutions in Asia. It’s located in a more condense, vertical urban campus in the heart of Hong Kong, which makes it especially attractive to students interested in the hustle and bustle of 24/7 city life. Students enjoy the nearby nightclubs, restaurants and markets in the Central district, accessible from the world’s longest escalator, 2,600 feet of moving stairs and sidewalks.

Komal Patel ’14, a public health/nutrition major from Cary, liked HKU’s urban campus and its educational opportunities. She could choose from a wide range of classes spanning the arts and sciences. During her fall 2012 study abroad experience there, she took a class on the psychology of Buddhism taught by a Buddhist monk. She learned meditation practices and attended a retreat at the monastery. She also studied the history of Western and Chinese medicine, art history and philosophy.

She lived in an international hall with students from China and all over the world. And she traveled to mainland China, Malaysia, Thailand and Japan.

“I’m grateful for the entire experience,” she said. “Hong Kong was overwhelming at first. But soon I realized I could use public transportation on my own, meet new people, go anywhere by myself, even at night. I learned I can adapt to anything and learn new things. This had a great effect on me, and I still reflect on it a year later.”

Jashawnna Gladney would not have been able to study in Asia last summer [see story above] without the scholarship support provided by the Hong Kong Alumni Club. She and Melody Lee, an anthropology major from Charlotte, were the first two recipients of the new award.

Established in 2008, the Hong Kong club is the first Carolina alumni group to provide support for study abroad. They raised $42,000 to support a total of six students (two each year) for a five-week summer study program at Chinese University of Hong Kong.

The alumni club created the scholarship specifically for Carolina Covenant Scholars, high-achieving undergraduates from low-income households, who have the opportunity to graduate from UNC debt-free.

“We wanted to help more students study abroad because it helps broaden anyone’s education,” said club co-chair Alex McMillan ’94, a British citizen who studied at UNC on a Morehead Scholarship (now called Morehead-Cain Scholarship). He’s been living and working in Hong Kong for more than a decade.