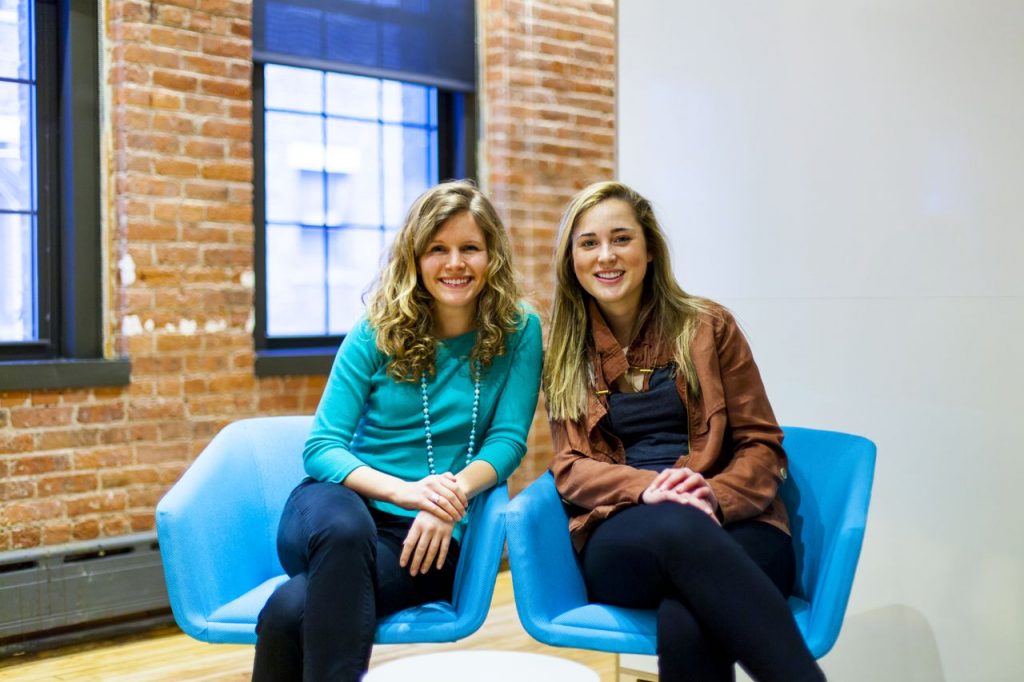 In the 2013 comedy “The Internship,” actors Vince Vaughn  and Owen Wilson play laid off 40-something watch salesmen who land internships at Google, competing against scores of tech-savvy younger interns for a coveted job at the Internet giant.

The two actors perhaps could have gotten a leg up by enrolling in Carolina’s minor in entrepreneurship or “e-minor” program, based in the department of economics in the College of Arts and Sciences.

At the tech behemoth, six standout young UNC alumnae are doing everything from writing code, making YouTube music better and promoting STEM — science, technology, engineering and math — careers to using their tech skills to promote causes and sports. They all credit the e-minor program for much of their success.

These “Googlers,” as employees are known, are working at a sometimes controversial $50 billion company that’s shaping today and tomorrow.

Two got their start as Google interns. The e-minor program consists of classes and an internship, and it provides real-world lessons from successful entrepreneurs. Nearly 1,000 students have enrolled in the e-minor since it launched in 2005.

Raleigh native Abby Bouchon ’13, a biology major, joined Google in a role that makes the most of her keen science aptitude and desire to be part of the next big thing. She says she hopes to help create a community for women in science and technology “to continue to do awesome things every day.”

She recently demonstrated her passion for beekeeping in a video highlighting how Google Glass, a wearable computer with an optical head-mounted display, could be used to teach beekeeping. The video was shot in a most unlikely place — atop New York’s landmark Waldorf Astoria hotel on Park Avenue. The segment was then shared with over 800 members of the Google+ Beekeeping Community.

Bouchon calls the opportunity to work at Google “a once in a lifetime experience. UNC and the entrepreneurship minor taught me that if you stick with your passions and are true to yourself, you can shoot for the stars.”

For Meghan Lyons ’13, a former UNC field hockey player from Wilmington, Del., the journey to Google has reconnected her to her alma mater. She’s pursuing her passion for sports and social platforms as a marketing associate in Google+’s community partnerships in sports in New York.

While at Carolina, Meghan served a wide variety of organizations, including the Carolina Athletics Strategic Plan Advisory Board and two terms as president of the Student Athlete Advisory Council. Her passion for connecting athletes to community causes made her a natural fit for Google.

Most recently, she worked with Denver Bronco Terrance “Pot Roast” Knighton to take Broncos fans to Super Bowl XLVIII with the team through Google Glass.

Lyons said the e-minor introduced her to some of the most creative minds at Carolina — and, in turn, some of her greatest friends.

“It’s neat to see my fellow UNC grads doing well. The projects that many of us worked on together at Carolina provided a great launching pad,” she said.

‘A tribute to great students’

Google, which was founded in 1998 as a search engine provider, has long since become more. The burgeoning company now owns YouTube and the Android operating system.

Getting an internship at Google isn’t easy — the company reportedly gets 40,000 applications for 1,500 slots each year. Interns are called Nooglers, short for new Googlers.

Snagging a regular job also is tough. In the past year, the company received nearly 1.3 million applications for 15,317 openings — or nearly 85 for each opening, according to Great Rated!, a job-seeker web site  produced by the Great Place to Work Institute in San Francisco.

UNC’s e-minor program is unique because it’s targeted to students in the arts and sciences. Students may choose one of five tracks to focus on: commercial, social, scientific, sports and artistic.

Buck Goldstein, University Entrepreneur in Residence, says the women’s diverse roles at Google are “a tribute to great students,” but noted that all had assembled impressive resumes while undergraduates by taking part in programs, conferences or initiatives that made them attractive to Google.

One example is Huntington, N.Y. native Mackenzie Thomas ’13, a marketing associate for politics and causes in community partnerships for Google+ at corporate headquarters in Mountain View, Calif. While an undergrad, she was co-director of the UNC Chancellor’s Student Innovation Team, co-founder and co-curator of TEDxUNC and co-president of the Campus Y, UNC’s center for social justice.

Thomas says the entrepreneurship minor and extra-curricular activities she and counterparts were involved with help “breed the type of student that looks for interesting opportunities that are both challenging and also meaningful.”

“Many of us are simultaneously quite quirky and have these disparate interests that often blend together in creative ways,” she says. “Thus we have very interesting stories coming out of college but also skill sets and past experiences that really are transferable to the real world.”

Thomas is putting her degree in economics and minors in both business administration and entrepreneurship to good use. She is partnering with influential, game-changing organizations to build and leverage communities of interest on Google+. The goal is to give citizens around the world the opportunity to interact with thought leaders ranging from former U.S. Presidents to Nobel Peace Prize winners, while highlighting “Benefit Corporations” such as vintage-inspired eyeglass manufacturer Warby Parker and organizations like TED and the It Gets Better Project.

“It’s sort of like a newsroom,” Thomas explains. “We’re making sure that a lot of what we do is timely and relevant and in touch with what’s happening now.”

And during a December 2013 event called Giving Tuesday, Google+ and Mashable teamed up to host the first-ever 12-hour “Hangout-a-thon,” which is similar to a telethon that raises money for social causes.

Thomas was there doing programming when she got a call from someone at NASDAQ who wanted to feature the fundraiser on its electronic board in Times Square and needed an image —stat. She scrambled to find out the dimensions, and it was live later that day.

Thomas also recently tackled the issue of global LGBTQ equality at the Winter Olympics through a week-long series that looked at supporting LGBTQ individuals in sports, the media and schools. This led to the publication of a “Google Doodle,” the fun, artistic changes sometimes made to the Google logo, that supported equality around the world.

Advocating for STEM and more

Bouchon is a marketing associate in Google’s Community Partnerships in education. She has a degree in biology and minors in chemistry and entrepreneurship. While an undergraduate, she interned at RTI International in Chapel Hill, was a Carolina Research Scholar, and was marketing and PR director of TEDxUNC.

“I’m trying to expose the ‘awe and wonder’ of the sciences to those who don’t get to see it on a daily basis, like we had the opportunity to do in UNC labs,” Bouchon explains.

Bouchon, Thomas and Lyons all worked on Carolina’s TEDxUNC conferences, which annually bring together innovative thinkers to discuss approaches to some of the world’s biggest problems.

Lyons, who has a degree in business journalism and a minor in entrepreneurship, says she integrates Google+ with a variety of sports partners to help the athlete build his or her personal brand, create unique content and enhance the fan experience.

“In the past few years, we’ve seen a huge shift in the world with the integration of various social media platforms,” she says. “Through Google+ Hangouts on Air, we have the opportunity to give athletes an opportunity to connect directly with their fans.”

One graduate who got her start as a Google intern is Charlotte native Jane Hall ’13, an associate product marketing manager in Google’s Mountain View headquarters. Hall has a degree in advertising and minors in entrepreneurship and information systems — a perfect background for her job.

Hall works on Google’s shopping and brand teams on campaigns one might see online or on television that help explain Google services. Recently, she’s been working on the launch of Google Shopping Express, a same-day delivery service in the San Francisco Bay area.

“It feels like working on a start-up, which I love because it’s small and scrappy,” Hall says.

On a typical day, Hall might shoot photos or videos for a press release or meet with product teams or engineers to produce road maps that lay out the product’s long-term vision. Hall has always loved technology. In college, she also interned for Twitter working to promote Twitter usage on campus — particularly for student government candidates — and later for Square Inc.

She was one of five Google marketing interns chosen to provide feedback on the script for “The Internship,” a Google film designed to show what it’s like to be a 20-something intern at the company. She hopes the film helps dispel the myth “that you have to be a computer science major to even get close to working here, because that’s certainly not true.”

Another student who got her start as a Google intern is Omaha, Neb.-native Rebecca Crabb ’12, a Morehead-Cain Scholar and former Carolina soccer player with a degree in computer science and a minor in entrepreneurship. She’s an associate product manager in Google’s San Bruno office, where she works on YouTube music.

Prior to joining Google, she interned at Evolution Robotics, a software firm, and for One Laptop Per Child, which she helped implement in Peru by teaching teachers and students how to use laptops as educational tools.

Crabb works closely with Google’s user-experience staff, engineering and cross-functional teams to take a product from idea to launch and in particular, to make the music consumption experience better for viewers. Before that, she was product manager for a small team of engineers whose focus was to make Google’s Chrome browser faster.

Burlington, N.C. native Stephanie Zolayvar ’12, has a degree in computer science, studied entrepreneurship, and is a software engineer in Google’s Seattle office. On most days, she can be found writing code and reviewing other people’s code. Her rescue dog, Maya, is usually on her lap or close by playing with colleagues’ canines. One of her favorite perks is that she can bring her dog to work.

Most of her work focuses on Google’s cloud platform of products — including a new product being built from the ground up. Zolayvar said e-minor classes taught her that “people like me can just go out and do things.”

Zolayvar noted that her team at Google is about 30 to 40 percent women. “The cool thing is that women are not only at Google, they’re also in leadership positions.”

‘Not just a whimsical world’

In January 2014, Google was named #1 on Fortune magazine’s “100 Best Companies to Work For” list for the fifth time. Not surprisingly, the company of more than 42,000 employees is known for its strong mix of work and play. Perks are the stuff of legend: onsite cafes, dry cleaners, bowling alley, subsidized massages, people riding scooters in the hallways.

The New York office has a virtual library with giant screens of revolving books. Employees can tap their phone against a book to download it, then read it in a private study area hidden behind the walls. Many offices have slides that funnel adventurous employees to lower floors. Crabb had knee surgery a year ago and avoids them.

“You go really fast and the landing is a little sketchy, so I’m afraid of the slides,” Crabb admits.

The free food is legendary — there’s a saying that employees pack on 15 pounds when they join Google. But several of the Carolina “Googlers” agree that there’s much more to the job than the perks.

“One of the coolest parts about being here is just how hardworking and how well-rounded so many people are,” Bouchon says. “It’s not just a whimsical world of primary colors and scooters. It’s really about working with people who want to change the world through technology and social good.”