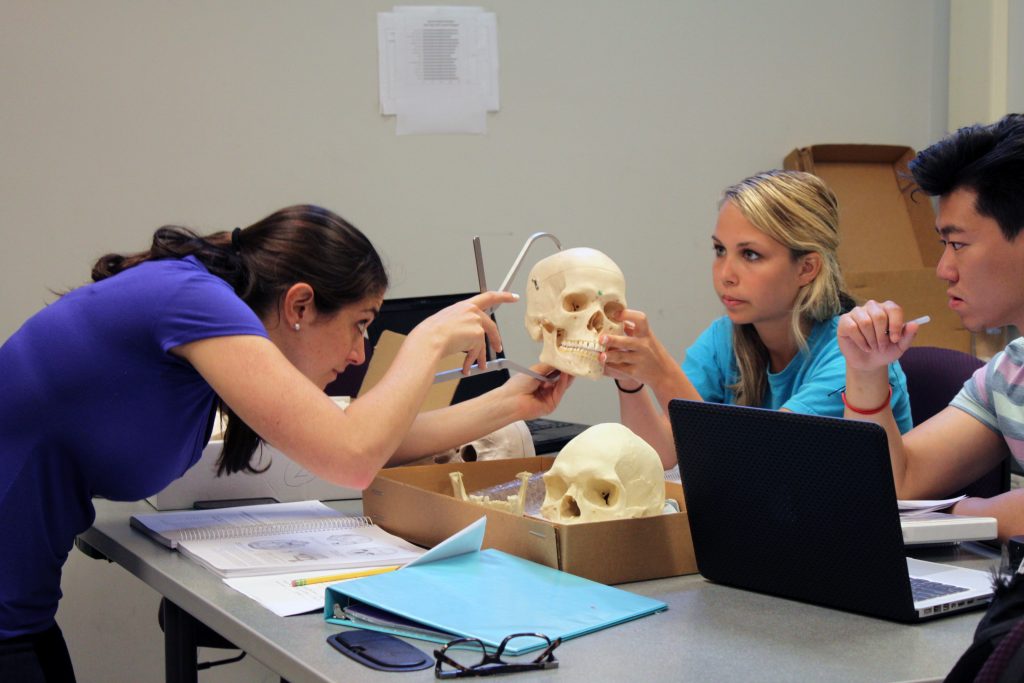 Anthropology Professor Dale Hutchinson teaches students how to map and recover the elements of a crime scene in his class, Anthropology 423: “Written in Bone: CSI and the Science of Death Investigations from Skeletal Remains.” The course combines laboratory training, field projects, lectures, films, discussion and student presentations about the science of human skeletal analysis.

Hutchinson said students often enroll in the class with no experience working with human skeletons because of the widespread popularity of forensics as a television subject.

Patrick Morrison (Spanish, biology ’15) said he took the class because he likes the TV show Bones, and he is considering forensic anthropology as a possible career path.

The class was taught in a three-week session during Maymester, so students attended longer classes every day. Maymester is an intense academic “mini-term” that begins the week after spring finals. Courses often feature a research or experiential learning component.

“This is a chance for them to get into a really, really different learning situation,” Hutchinson said. In one day Hutchinson says he typically uses three methods of instruction to break up the time. Students might go from taking notes on a lecture to a quiz and then directly to examining the bones.

Grant Muir (anthropology, political science, ’15) said this method brings the material to life. “It helps to go from something like doing a Power Point and then the next hour visualizing the bones and holding the bones,” he said.

In the class students learn how to  recognize trauma resulting from different  weapons. They explore how to distinguish a person’s age, sex and height from skeletal remains.

Rachel Dickinson (global studies, French, ’13) said her favorite part of the class was a day when the students dug up bones Hutchinson set up as part of a “crime scene.” They  analyzed the bones at the lab.
Muir said he enjoyed being able to see and touch a part of the past: “You really get a sense of what things feel like, and what they’ll look like after a certain amount of time.”