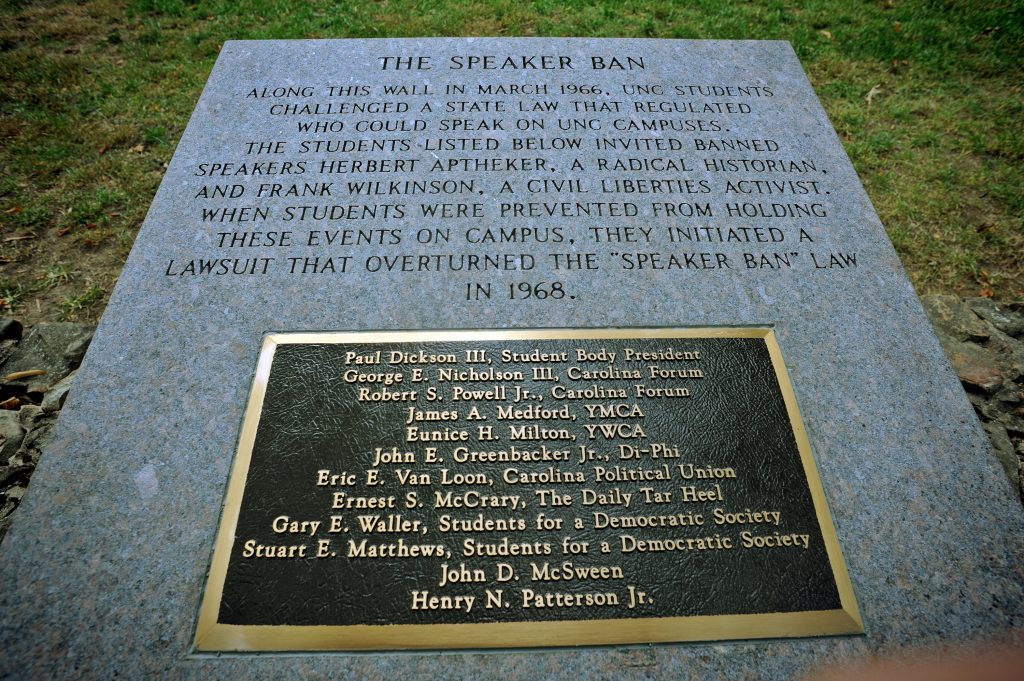 Click on links at the bottom of this story for more articles on the Center for the Study of the American South. Read a sidebar on the Program’s new director.

Since its founding in 1973, the Southern Oral History Program has held as its guiding principle, “You don’t have to be famous for your life to be history.” Now celebrating its 40th anniversary, the Program’s focus has continued to be on preserving the voices of the American South.

Through more than 5,000 interviews, which are archived in the Southern Historical Collection, and a variety of initiatives, the Program showcases the voices of everyday people who have lived and created history.

“Media and the Movement: Journalism, Civil Rights, and Black Power in the American South” is a National Endowment for the Humanities-funded  project that looks at the intersection between activism and journalism in the American South before, during and after the civil rights era. The project is a partnership between UNC, Duke and N.C. Central universities.

Seth Kotch, UNC project director, says there was a  significant transformation in the South during and after the civil rights movement. The project co-director is Duke historian Joshua Davis.

“We are interested in exploring how journalists helped change the communities they covered, as well as how journalists themselves were changed,” he says. “There were many people who continued and extended their activism by founding their own newspapers and starting their own radio stations.

Many of these civil rights-era journalists are still active today.

“We have a tradition of good journalism in North Carolina,” says Kotch. “We have an impressive array of locally founded, community-oriented media outlets, particularly in Durham and Raleigh.”

Among the media included in the project are Durham’s WAFR — the first public, community-based black radio station — and Warrenton’s WVSP, just two of the community-oriented radio stations that offered an outlet for the voices and issues of African-Americans.

“What we learn about the relationship between the media and the communities that those media are supposed to serve is relevant today,” says Kotch. “In the same way that community-oriented media arose during the civil rights era, the Internet is offering people new ways to express themselves.”

While Media and the Movement captures stories throughout the state, the University History Project highlights voices closer to home. That project has collected about 400 interviews from members of the Carolina community — including students, staff, faculty, and administrators — focusing on the history of UNC.

“It is deeply important not to lose institutional memory,” says Rachel F. Seidman, Southern Oral History Program associate director. “This University is going through major transformations and transitions and at times like this, the ability to look back and see where we have come from and where we hope to go is a particularly important task.”

“Oral histories can provide a very lively and emotionally rich connection to the past,” she adds.

That emotional connection came alive last spring in an evening performance at the Love House and Hutchins Forum by a group of undergraduate students. During a semester-long internship with the Program, the students researched the history of the Speaker Ban, a North Carolina law enacted in 1963 that restricted the appearance of Communists and other radical speakers at state-supported universities, including UNC. With support from the University Archives, the students interviewed local community members who had been involved in protesting the ban and then created a theatrical script from transcriptions of the interviews.

“During our project, we focused a lot on the modern parallels between the Speaker Ban and some of the legislation in the General Assembly that was being put forth at that time,” says Blanche Brown ’15. “It’s important to preserve the history of students who normally didn’t work together, but who came together with the Speaker Ban protest, to uphold what a university should be and is: a place where you ask questions, push boundaries and discover things.”

During her internship, Brown interviewed Jerry Carr — who helped start UNC’s Students for a Democratic Society chapter — and Jock Lauterer, who was a photographer for The Daily Tar Heel and is now a lecturer at UNC’s School of Journalism and Mass Communication.

Seidman says that it was powerful for the interview subjects to hear their stories reflected back to them by undergraduates.

“The students did an amazing job highlighting the themes of political engagement, dissent, and tension and creativity that the Speaker Ban protest involved,” she says.