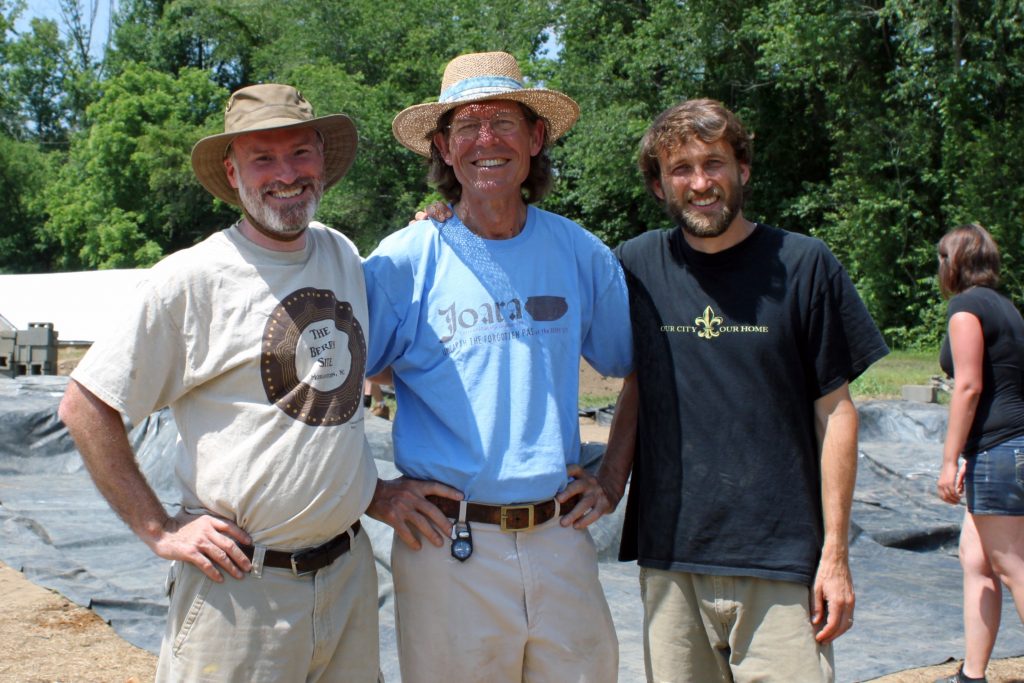 Exploring Joara: Excavating the past, shaping the future in western N.C.

When UNC alumnus Robin Beck was a young boy, he loved roaming the Morganton-area farm owned by his uncle and aunt, James and Pat Berry, in the North Carolina foothills. The land has been in the Berry family since before the Revolutionary War.

As Beck (B.A. political science ’91) walked around kicking up dirt, he was amazed at the arrowheads and pieces of pottery he found. The budding archaeologist would then match those pieces of pottery with pictures in books at the neighboring McDowell County Library.

At the time, Beck said, he had no idea of the significance of what was underneath his feet.

Years later, Beck went on to pursue a Ph.D. at Northwestern and became an assistant professor of anthropology at the University of Michigan. He would join two UNC archaeology alumni to document the earliest European settlement in the interior of the United States on the Berry land.

Fort San Juan was established at the site of the American Indian town of Joara in 1567, two decades before The Lost Colony at Roanoke Island, 40 years before Jamestown.

Explorer Juan Pardo named the Spanish settlement Cuenca after his hometown in Spain. It lasted less than 18 months before the relationship between the Indians and the Spanish soldiers took a disastrous turn. The fort was burned to the ground, as were other forts built by Pardo. One Spanish soldier escaped and brought news to the Spanish colonial capital at Santa Elena, S.C. (today’s Parris Island), that the experiment was over.

The North Carolina Office of Archives and History, in explaining the historical marker erected in Morganton, wrote: “The Berry site witnessed one of the longest periods of sustained contact between Europeans and the peoples of North America’s interior until the 17th century.”

Beck and his Tar Heel colleagues David Moore (Ph.D. ’99), a professor of archaeology and anthropology at Warren Wilson College in Swannanoa, N.C.,  and Christopher Rodning (Ph.D. ’04), an associate professor of anthropology at Tulane University, formed the Exploring Joara Foundation to support their long-term work at the Berry site. (Moore came to UNC from the University of California at Berkeley to pursue graduate studies, and Rodning came from Harvard.)

The slogan of the Exploring Joara Foundation is “Unearthing the forgotten past.” It is a unique partnership, one committed to a strong outreach component. Summer camps, field schools, teacher workshops and an annual archaeology festival allow the scientists to share their finds with the public and to have students participate regularly in their work.

Moore, who has been excavating at the site since 1986, said the story of Fort San Juan and Joara has great significance beyond a pretty 12-acre field in Burke County, which today is surrounded by a tree farm.

“The story here is exciting. It’s compelling. It’s fascinating,” said Moore, who served for 18 years with the N.C. Office of State Archaeology. “It’s important for people to understand real Native American history — the heroics, the tragedies, the disappointments. … This is a site at which you have an episode of the classic Colonial encounter that happened thousands of times as Western Europeans began to colonize the rest of the world.”

The three scholars are now dipping their toes into heritage tourism. Exploring Joara is building an Archaeological Interpretive Center at Catawba Meadows, a 200-acre city park along the banks of the Catawba River in Morganton.

The center is being developed on the footprint of a significant ancestral Catawba Indian town that also is currently under archaeological study. It will include a palisade, a garden, an exhibit hall and two replica Indian dwellings. Archaeologists can then share what they’ve found at both the Catawba Meadows and Berry sites at a location that is more accessible to the public. Catawba Meadows will be the focal point for a Western North Carolina “archaeology trail,” which would link together other important historical sites.

“This is a really important economic development project for our region,” said Sam Avery (education ’77), a former history teacher, a native of Burke County and chairman of the Exploring Joara Foundation. “We’re excited about what this will do for tourism. … This will bring history to life.”

A series of coincidences, connections and what Beck jokingly calls “a lot of lightning strikes” connected the UNC alumni to the Berry site.

In 1994, Beck discovered a strange piece of green glazed crockery when walking the Berry property with his brother Kevin. They also found a large, wrought iron nail.

Beck made some connections with colleagues at the University of Georgia, namely the late Charles Hudson (Ph.D. ’65), who had written extensively about the expeditions of Spanish explorers Hernando de Soto and Juan Pardo across western North Carolina. With their help, Beck identified the piece of pottery he had found as part of a Spanish olive jar.

Beck then drove up to Asheville to see Moore, whom he had met many years earlier. Together they examined pottery fragments Moore found in 1986 and compared them with Beck’s 1994 find.

What they discovered would change the course of their research.

“Dave picked up my glazed (pot)sherd — and he had part of the same olive jar, from his 1986 excavation,” Beck said. “We walked the site again together and found a piece of Spanish majolica, a glazed earthenware sherd that was probably part of a small medicine jar. Soldiers would often carry salve for bee stings or other ailments with them.”

“Dave said maybe this will make a good paper for the annual Southeastern Archaeological Conference. Well, it’s done a lot more than that.”

The two asked Rodning to join their research team to broaden the scope of their work. Rodning’s Ph.D. dissertation adviser was Vin Steponaitis, now chair of UNC’s curriculum in archaeology. Rodning said his UNC professors and his collaboration with Beck and Moore have played a critical role in his development as a scholar.

“We like to say that the whole is greater than the sum of its parts,” Rodning said of the decision to form the collaborative research project and create Exploring Joara. “The three of us have different strengths and knowledge which overlap and complement each other. Together we make a good team.”

In subsequent years, the trio has discovered the remnants of five burned buildings that probably housed Pardo’s soldiers. They have published numerous books, chapters and papers on their research, which has been supported by grants from the National Science Foundation, the National Geographic Society and the Blue Ridge National Heritage Area.

The summer 2013 excavations focused on a bulldozed Indian mound that was first documented in an 1891 report by Smithsonian archaeologist Cyrus Thomas.

While excavating near the edge of the mound in June, the Exploring Joara scholars found remnants of the fort itself, including a section of a moat, a bastion at one corner near an apparent entryway paved with gravel, and a possible “strong house.” The exciting discovery was featured in The New York Times. Further study of the mound and the fort will add new chapters to the story. Written accounts indicate that Fort San Juan was abandoned in the spring of 1568.

In past seasons, excavations at the Berry site have unearthed fragments from several different olive jars, pieces of chain mail, lead shot, a scale used for weighing supplies and rock samples, an iron knife and remnants of burned roof beams, among many other items.

At the annual Public Archaeology Day last June, Moore, donning a straw hat to ward off the sun, led visitors on a tour. He described what he calls “the coolest Spanish artifact” that has been discovered yet at Fort San Juan.

“This season we found an iron fastener, a hook for holding together boots or clothes. It was made of iron and highly eroded, but we knew instantly what it was.”

Changing our understanding of N.C. history

Morgan Welch ’15, who is majoring in archaeology at UNC, participated in field work at the Berry site in summer 2012. She grew up in nearby Valdese. She returned to the Berry site last summer as an intern with Exploring Joara.

“It’s pretty much where I fell in love with archaeology,” said Welch, who is the co-founder and vice president of UNC’s Society of Undergraduate Archaeologists. She has also participated in a dig in Natchez, Miss., with Steponaitis. “I love the mystery of it. It’s more about playing the part of Sherlock Holmes rather than Indiana Jones — the goal is inquiring into the past as well as preserving it.”

Steponaitis said the archaeological work led by Moore, Beck and Rodning at the Berry site “is changing our understanding of North Carolina’s history in ways that documentary research alone could never do.”

“This project also illustrates how Carolina’s undergraduate and graduate programs attract top-notch talent, people who continue to benefit the state long after they graduate.”