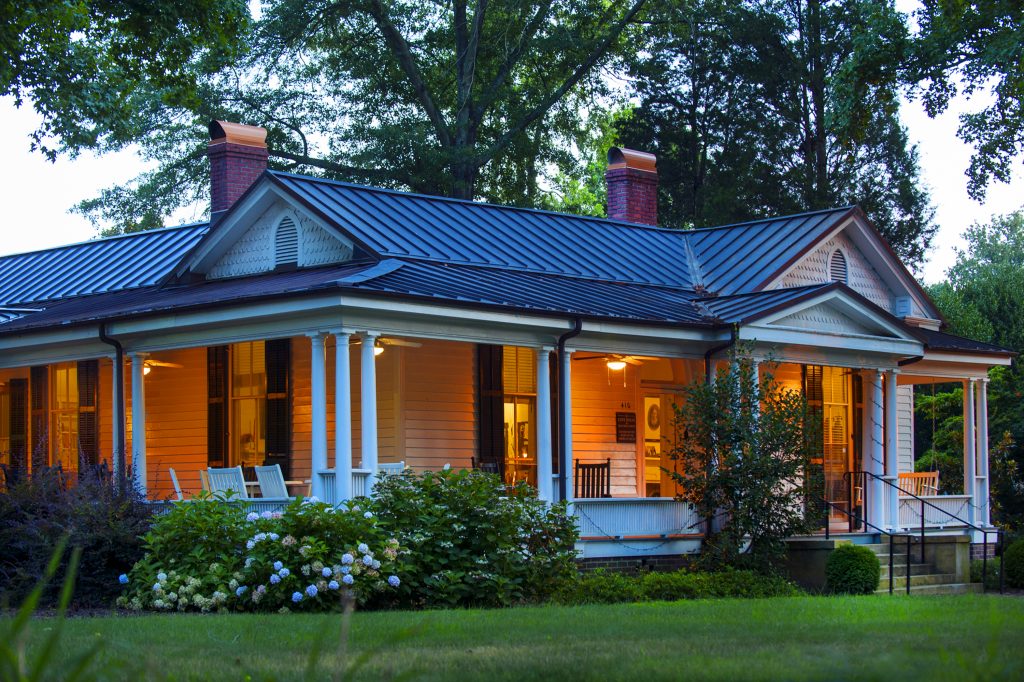 The Love House and Hutchins Forum, home of the Center for the Study of the American South, illuminated at sunset. (photo by Donn Young)

Click on links at the bottom of this story for more articles on the Center for the Study of the American South.

The tree-shaded, white-frame house at 410 E. Franklin Street has an ample front porch, rocking chairs and a storied history. It’s a perfect setting for UNC’s Center for the Study of the American South, which this year celebrates 20 years of exploring the region’s complex history and culture.

The abode is the historic Love House. Built in 1887, it was home to James Lee Love, a mathematics professor whose mother-in-law may be the home’s most famous occupant, the writer and community advocate Cornelia Phillips Spencer. Through a generous gift from the Hutchins family in honor of alumnus James A. Hutchins ’37, the building was renovated in 2007 and renamed the Love House and Hutchins Forum to recognize the contributions of the two families. The Hutchins family’s support also enriches the work of the Center, including their sponsorship of the Hutchins lecture series.

The Center explores research on the past and present American South through a diverse interdisciplinary lens that includes history, literature, folklore, music, sociology, anthropology, religious studies and more.

The front porch, where current Center director and music professor Jocelyn Neal was enjoying lunch with her staff on a gorgeous afternoon, symbolizes what the Center has strived to do — reach out to the community to share its scholarly work in a very accessible way. The house has opened its doors for lectures, art exhibits, graduate student research sessions, music, conferences, book-signings and seminars.

“The South is a region with an important history, but also a region with a future,” said Neal. “It’s our responsibility to try to understand the South and contribute to the best possible future.”

It’s a year of multiple milestones, as the Center’s Southern Oral History Program marks a 40th birthday of preserving the recorded voices of the Southern past, from mill workers and civil rights leaders to future presidents of the United States. Southern Cultures, the peer-reviewed journal, also reflects on two decades of reporting on the history and culture of the U.S. South.

Neal serves as co-editor of Southern Cultures along with Harry Watson, a UNC historian and the Atlanta Professor of Southern Culture. Watson led the Center for 13 of its 20 years. He was involved in early discussions about the Center’s founding, along with anthropologist Jim Peacock, sociologist John Shelton Reed, and David Moltke-Hansen, who at the time was director of the Southern Historical Collection.

Watson oversaw the Center’s move from Hamilton Hall to its current space in Chapel Hill’s historic district. Extensive renovations to the Love House were completed in an effort to retain its historical character, open it up for public events and have it fit in with the neighborhood.

Help from a recent donor has expanded on that focus. Each summer the Center awards research grants to graduate students, who present their work to the public in the fall. Olivia Delacruz, a member of the Center’s advisory aboard, funded the work of 10 summer 2013 grant recipients, along with providing additional support for the Global American South Conference and the rollout event for a film the Center commissioned on journalist Horace Carter.

“The Editor and the Dragon: Horace Carter Fights the Klan” documents the life of the late Horace Carter, a UNC alum “who won the Pulitzer in 1953 for his work as editor of a small-town North Carolina newspaper when he took on the Ku Klux Klan and displayed stunning bravery and unwavering integrity,” Neal said.

The film debuted at the Full Frame Documentary Film Festival in Durham, and it has been selected for future broadcast on UNC-TV.

“Our philosophy has always been that the study of the world is magnificent and we don’t want to give up our focus on that, but we don’t want to ignore our Southern roots either,” said Watson. “We are the best place in the world to do this.”