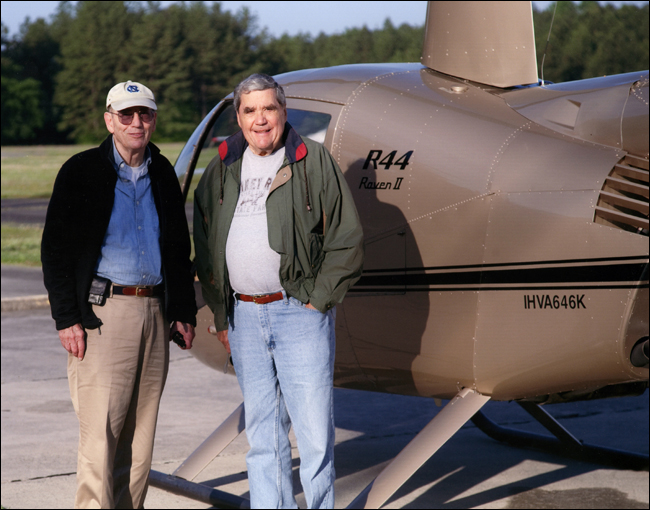 On May 3, 2012, David Godschalk and Jonathan Howes took a helicopter ride with Richard Tate of American Aerial Photos, who shot aerial pictures of the transformed Carolina campus for their book.

Chronicling a decade of campus growth

Before the decade began, many doubted it could be done.

Before it ended, many more began to wonder if it ever would.

At the end, three longtime friends who had been in the thick of it from start to finish, saw an unbelievable story waiting to be told – then joined forces to make sure it was.

The resulting story is “The Dynamic Decade: Creating the Sustainable Campus for the University of North Carolina at Chapel Hill, 2001–2011.”

When they could not find a publisher, retired faculty members David Godschalk and Jonathan Howes took on the project without pay. They turned to Bruce Runberg, associate vice chancellor for facilities services, to assist in research staffing and publishing the book. UNC Press distributed the book.

Runberg said he wanted a historic record of the development for the University, and when Godschalk and Howes came to him with their proposal, he knew that was what they could deliver.

“They know the story because they played such critical roles behind the scenes to help make it happen,” Runberg said. Neither Godschalk nor Howes is a professional historian, but both are academic planners who for nearly a half-century used their knowledge as consummate citizens of both Carolina and Chapel Hill.

Godschalk joined the faculty of the Department of City and Regional Planning in 1969; Howes earned his master’s degree from the department in 1961, returning to Carolina in 1970 to become director of the Center of Urban and Regional Studies.

Both men served on the Chapel Hill Town Council. Howes also served two terms as mayor before heading to state government in 1993. He returned in summer 1997 to serve as special assistant to Chancellor Michael Hooker, where he led the three-year effort to develop the new campus master plan that Hooker had called for.

After Hooker’s death in 1999, Howes continued to serve as a special assistant to chancellors Bill McCoy, James Moeser and Holden Thorp before he retired in 2009.

Since Godschalk and Howes had been on both sides of the town-gown divide, they were uniquely qualified to help bridge the gap.

The challenge, Godschalk said, was figuring out a way to “harness these two major forces and try to get them to work in tandem rather than chewing at each other’s throats all the time.”

Howes said it is important to understand the distinction between the campus master plan, which Hooker said he wanted in 1998, and the campus development plan that came about several years later.

The master plan was concept-driven, and in a sense, aspirational – a blueprint for growth rather than a map to guide it.

The development plan spelled out in intricate detail all the projects the University intended to build during the next decade, with agreed-upon limits for how much total space could be added.

For the development plan to work, however, the town council had to approve it. That happened in October 2001 under an agreement providing a new zoning category that eliminated the requirement that the town approve each new construction project – a process that in the past had taken two years or more.

It was sort of like clearing the runway for takeoff, Godschalk said. From that point forward, the town gave the University the green light for growth that made the dynamic decade possible, he said.

Under Moeser’s leadership, Howes said, the concepts of the master plan were woven seamlessly into the design and character of every project included in the development plan. And Moeser came along at exactly the right time for that to happen.

“His first day on the job as chancellor was Aug. 1, 2000,” Howes said. “On Aug. 2, he was down in the basement of Morehead Planetarium, pouring over all the maps and models that reflected the thinking of the new campus plan up to that point. He spent virtually the whole day with us absorbing all the work that had been done. At the end of that day he said, ‘I like this plan, and I’m going to support it.’”

That fall, during his installation speech on University Day, Moeser not only announced his support for the $3.1 state bond referendum for higher education , which voters approved the following month, but also pledged to raise $3 from other sources for every $1 of bond money Carolina received.

Moeser did far more than keep his promise, Howes said. Between 2000 and 2009, the University invested $2.31 billion in capital projects, including $515 million of bond proceeds.

The scale and speed of the construction completed here had never been attempted on an existing campus anywhere in the country, Runberg said. Even more remarkably, nearly all the projects were completed on time and on budget.

“We built an amount of space equivalent to the building space at Wake Forest University – and we did it while everything was still operating,” he said.

Runberg said his staff nearly doubled, from 32 to 62, to keep pace. “We had a great team. Everybody understood what had to be done.”

From 1995 until his retirement nine years later, Godschalk chaired the University’s Building and Grounds Committee, contributing his know-how to help develop the master plan and to critique the architect’s preliminary plans for each new building.

Moeser then appointed Godschalk to the newly formed design and review group charged with upholding the campus master plan architectural standards for each building constructed.

All that attention to detail paid off, Runberg believes.

“I talk to people regularly about the various projects that we were responsible for,” he said, “and nine out of 10 times, the comments are positive rather than, ‘Well, that’s an ugly building.’”

Howes and Godschalk said they had several target audiences in mind when they wrote the book.

They wrote it for professional planners around the country, particularly those in university towns faced with similar challenges and opportunities. They wrote it to chronicle what they believe is an important epoch in campus history.

And they wrote it for Carolina’s faculty and staff and the thousands of students who had to navigate construction zones.

“We see it as a book for all the people who lived through the decade and walked by the cranes and bulldozers every day,” Godschalk said. “It serves as a kind of record of their time here and some of the good that came out of all that torment that they sometimes had to endure.”