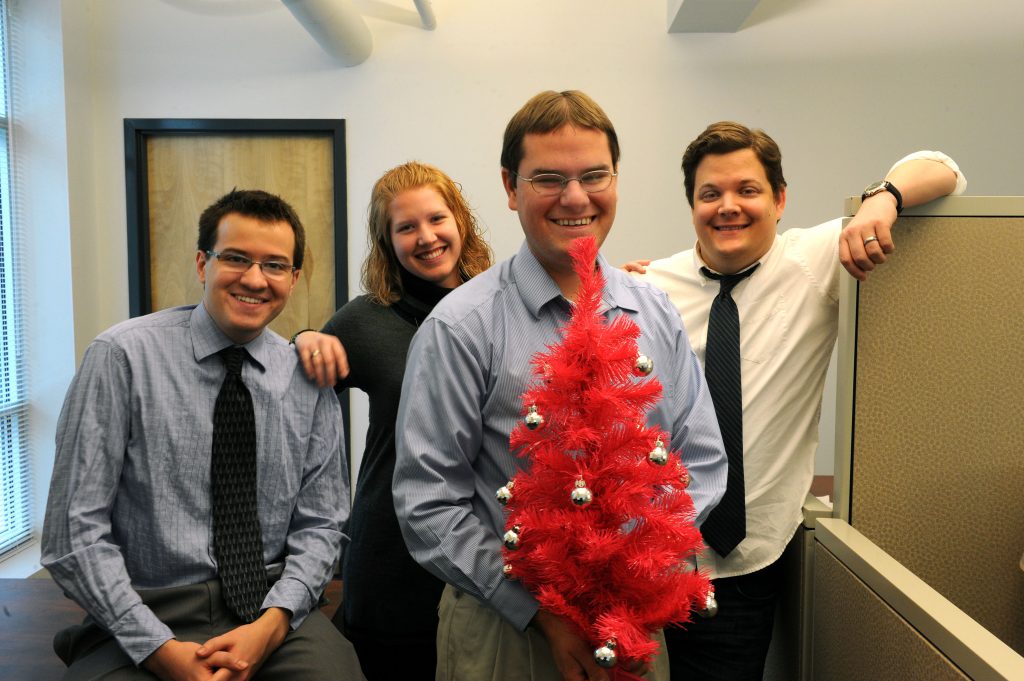 No. 1 Pollster: Alum’s firm named most prolific, accurate in the U.S.

When not fielding media interviews or tweeting to a growing cadre of poll junkies, Tom Jensen can usually be found crafting questions for the newest poll or slicing and dicing data for often spot-on accurate results.

Public Policy Polling (PPP), a Democratic-leaning polling operation based in Raleigh, is considered one of the top and most accurate polling organizations in the U.S. Jensen (political science and history ’06), an Ann Arbor, Mich., native and UNC Honors graduate, is director of PPP and oversees daily operations.

PPP was founded in 2001 by entrepreneur Dean Debnam, who’s now president and CEO. Jensen joined the group in 2008 and has helped build the once small startup into a successful business with a national profile.

A March 2012 NPR report called PPP “one of the most prolific polling outfits in the country.” A report by Fordham University found that, of 28 firms studied, PPP had the most accurate poll on the 2012 national presidential popular vote. And The Wall Street Journal ranked PPP as one of the top swing state pollsters in the U.S. during the 2008 election.

“The post election polling analyses found that there was nobody better than us,” Jensen said.

The firm fields about 800 polls annually for public and private clients that include the League of Conservation Voters, Planned Parenthood, the San Francisco Giants and Daily Kos.

The company is often spotlighted on national television and radio, and its polls have become popular fodder for “The Rachel Maddow Show” and comedian Stephen Colbert’s “The Colbert Report.”

Jensen said what sets PPP apart is its sense of humor and propensity to sometimes ask unexpected and quirky questions. A January 2013 poll during divisive fiscal cliff negotiations asked respondents who they liked better — cockroaches or Congress. Cockroaches beat Congress, 45 to 43.

“We really just try every now and then to do some polls that both Democrats and Republicans can just laugh at,” Jensen said.

In addition to a lifelong love of politics, Jensen has long excelled at math. That’s important because polls are more accurate when data is “weighted” to better reflect the general population. For example, women are more likely to answer polls than men, and older people and Caucasians are more likely than racial minorities.

It’s not always perfect, and Jensen said he prefers learning from mistakes rather than making excuses. In 2008, PPP incorrectly projected that President Barack Obama would win the Pennsylvania Democratic primary by three points. Hillary Clinton ended up winning by nine.

“If we really mess up a poll, I’ll write an apology on our website,” Jensen said. “I hate telling people that something is going to happen, and then it doesn’t happen. That just kills me.”

Jensen boosts PPP’s profile by managing its Twitter account, which boasts more than 58,000 followers. He also oversees the company blog, which has responded to “hate mail” and expletive-filled voicemails from people unhappy with poll results.

“It’s just amazing the level of interest and how emotional people can get about the stuff pollsters are doing,” Jensen said.

Outside the office, Jensen is the unofficial head cheerleader for the Carolina baseball team. He goes to about 50 games a year and can often be found starting the Tar Heel chant from the stands.

PPP’s office features a garish fake pink Christmas tree that stays up year-round and is often used as a backdrop for television interviews. Jensen recently took the staff to Chuck E. Cheese’s for lunch, then quickly tweeted photos of an intern who won the skee-ball game.

The company is run by about 20 people who help with IT and business development, but the core group of four full-time employees and two interns is all Carolina alums or alums-to-be.

Jensen said it’s a strong testament to the strength of the University’s political science department.

“We have a really great staff,” Jensen said. “This is very much an entity run by Carolina political science majors. We take the polling very seriously, but we try not to take ourselves too seriously.”