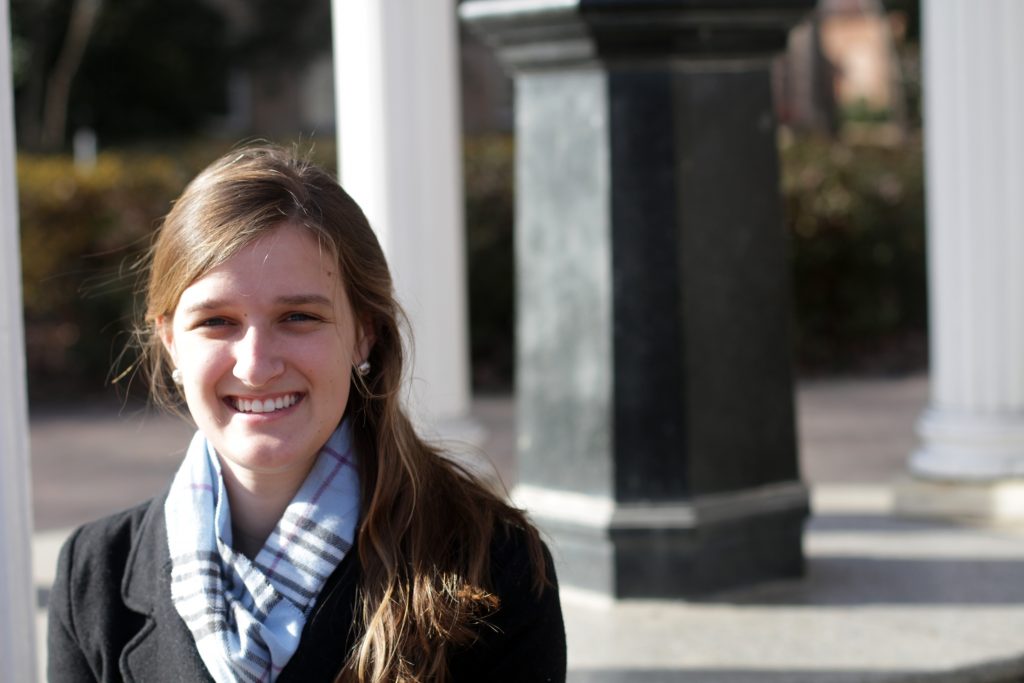 Carolina senior Rachel Myrick of Charlotte won a Rhodes Scholarship. She was among 32 Americans selected for the award out of a pool of 838 candidates. (photo by Mary Lide Parker)

A Liberal Arts Rhodes: The road for senior Rachel Myrick leads to Oxford

Even senior Rachel Myrick admits that if you look at a list of some of the classes she’s taken during her four years at Carolina — Swahili, econometrics, international relations, fiction writing, political feminist theory — you might think, “What?”

But that diverse list of classes for UNC’s newest Rhodes Scholar — who is pursuing majors in political science and global studies and a minor in creative writing — is exactly what a liberal arts education is all about, the Charlotte native argues.

“My experiences in college have shaped not only my desire to be able to explore one subject in depth, but to also bring in different lenses from different disciplines,” she said. “I love looking at ethnic conflict, but I don’t have to necessarily pursue that through political science or mathematics or economics. I can bring in literature and art. … I think it makes you a much better critical thinker.”

As a junior, she had a chance to put those skills into practice when she designed, developed and co-taught a course on “Genocide Reconciliation through the Narrative.” The Honors Program allows a select few students to teach a seminar-style course with the help of a seasoned faculty mentor. In Myrick’s case, that was Pam Durban, the Doris Betts Distinguished Professor of Creative Writing.

“I’m interested in the political reconstruction aspects of ethnic conflict, but I’m a creative writing minor, so I was looking for a topic that combined those two,” she said. “In each class, we studied a different ethnic conflict, and then we would read narratives from that conflict.”

Thanks to the prestigious Rhodes Scholarship, Myrick will pursue a master’s in international relations at Oxford University, with a focus on the causes and consequences of ethnic conflict in world politics. She was among 32 Americans selected for the award out of a pool of 838 candidates.

Myrick’s interest in ethnic clashes started early, after a high school trip to Rwanda. UNC Associate Professor of Political Science Mark Crescenzi, an expert in international conflict, was instrumental in her decision to explore this issue through a political science major.

“He spoke at my C-TOPS orientation my freshman year, and I remember writing his name down and being like, ‘Wow, I had never thought about studying conflict.’” She ended up taking classes with Crescenzi (including a graduate-level seminar), and he became her thesis adviser.

Crescenzi wrote in her Rhodes application that Myrick “learns like a scholar, diving into readings like a competitive swimmer dives into a pool.”

Her list of classes, accomplishments and her thesis topic —“Simulating Ethnic Fluidity in Electoral Systems” — might make your head spin.

Thanks to the Morehead-Cain Scholarship Program, Myrick spent summers in Belize and Cambodia doing volunteer work. She studied in London for a semester through the Honors Program. She’s currently serving as Carolina’s Student Body Vice President. She chairs the Student Advisory Committee to the Chancellor (a committee she has served on since her freshman year). And she expects to graduate as both a Carolina Research Scholar and a Carolina Public Service Scholar.

But one of the most fun events she has brought to campus has been the successful TEDx (www.ted.com/tedx) conferences — a series of inspiring talks organized through TED, a nonprofit devoted to “ideas worth spreading.” She applied for and received a license to organize UNC’s first conference in spring 2012. Online tickets for that event sold out in 34 seconds, and the February 2013 TEDxUNC was a huge success.

When the Rhodes interviewers first called her name and told her she had won a scholarship, Myrick said she was shocked.

“There are so many qualified students at this university who deserve it more than I do,” she said. “I think part of what they’re looking for in addition to academic chops is a well-rounded, genuine person, and I think a lot of Carolina students have those qualities. Academic excellence, good character and public service go hand in hand at Carolina.”