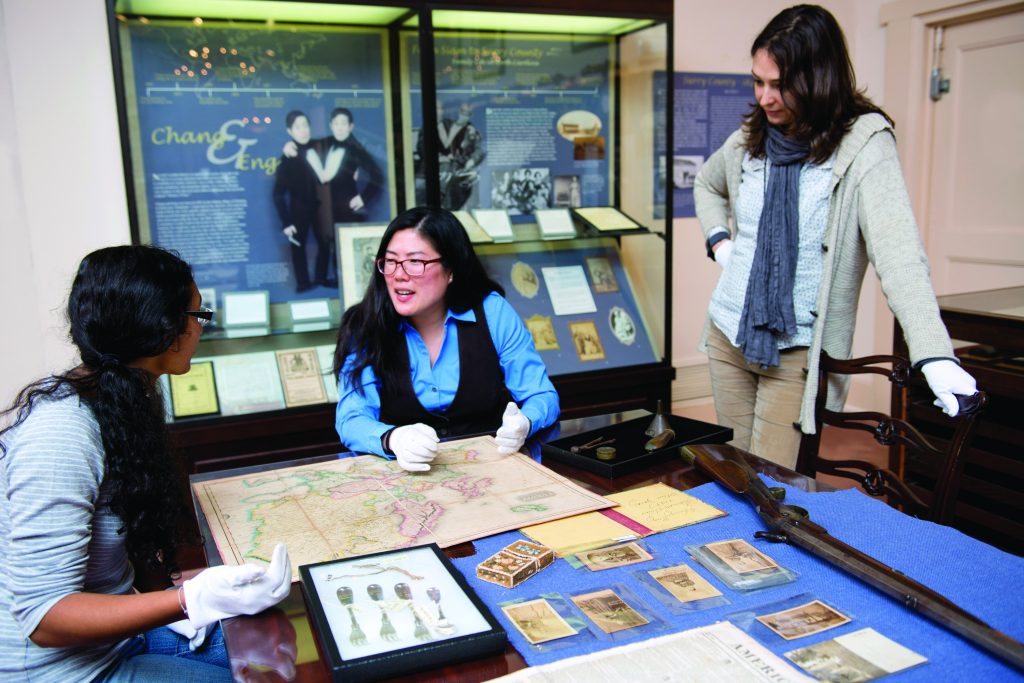 Heidi Kim believes in having her students create projects that connect literature and history and stretch beyond the walls of the University.

They have held public events with Wilson Special Collections Library on the famous conjoined Siamese twins Chang and Eng Bunker, and on World War II Japanese-American internees. They have created websites and provided research on those topics for University of California at Berkeley playwright Philip Kan Gotanda, who has visited UNC on multiple occasions.

“I think sometimes students don’t know how to be engaged with literature themselves other than just reading it and writing a paper for my consumption,” said Kim, an assistant professor in the department of English and comparative literature. “It’s been my goal to show them they can make a real contribution and also to show them how the University contributes to and is a real steward for the community.”

In fall 2011, her Honors course on literature and history delved into the lives of the Bunker twins, who have a strong North Carolina connection. They were born in Siam (now Thailand) in 1811 and were connected at the chest by a five-inch band of flesh. The twins spent many years traveling around the world, but later tired of living in the public eye, and in 1839, settled in Wilkes County, N.C. They married sisters Sarah and Adelaide Yates, eventually moved to Mt. Airy in Surry County, and fathered 21 children between them.

UNC Libraries have assembled the largest known collection of documents and memorabilia related to the Bunker twins. Students researched the lives of the Bunkers for Berkeley’s Gotanda, who was writing a play about them. The class then invited Gotanda to a December 2011 public event with the help of the Friends of the Library. About 200 people listened to the playwright read and discuss his work, and students shared their research.

Kim continued her students’ work on the Bunkers and Gotanda’s play in fall 2012 for an Asian-American theater class. Wilson Library had received new items donated by Bunker descendants, including a hunting rifle, four pieces of silverware, and maps of Canada and Europe. Gotanda returned to read his play-in-progress, with feedback from students, as part of UNC’s Process Series, which features creative works in development.

Students were divided into groups and assigned an artifact to research. Senior English and sociology major Domonique Baldwin’s group examined the hunting rifle. They played detective, discovering information on the gun maker and about how the conjoined twins might have fired it.

“It brought history to life,” Baldwin said. “I’m used to examining and dissecting texts. I’ve never been given an object and told, ‘You tell me something about it.’”

Students posted their projects online at changandeng.web.unc.edu, which Kim is hoping to turn into a larger digital humanities project. The students’ research provided new information about the donated artifacts, said Linda Jacobson, who is curator of the N.C. Collection Gallery.

“A lot of times these students have not worked with primary sources before,” she said. “It connects them so much more to history when you have an actual artifact to hold.”

Kim once again developed a public event that showcased students’ research on a different topic — the Japanese-American incarceration during World War II.

Through spring and fall 2012 First Year Seminars, they researched life in the Arizona incarceration camp Poston and created a Web site, poston.web.unc.edu. In May 2012, they presented their findings at Wilson Library and invited a camp survivor, Joanne Iritani, to speak. They also continued their research partnership with Gotanda, whose parents were incarcerated at the Rohwer camp in Arkansas. He is considering writing a new play on the topic.

Sophomore Laura Hanson, a business and journalism major, discussed infant care in the incarceration camps at the Poston event. She also went to dinner with Iritani and learned more about her experiences. Hanson said Kim emphasizes exploring history through people’s personal lives.

“She was such a vivacious and engaging professor, my favorite at UNC so far,” Hanson said. “People who have lived through [incarceration] can tell you things a textbook can never tell you.”