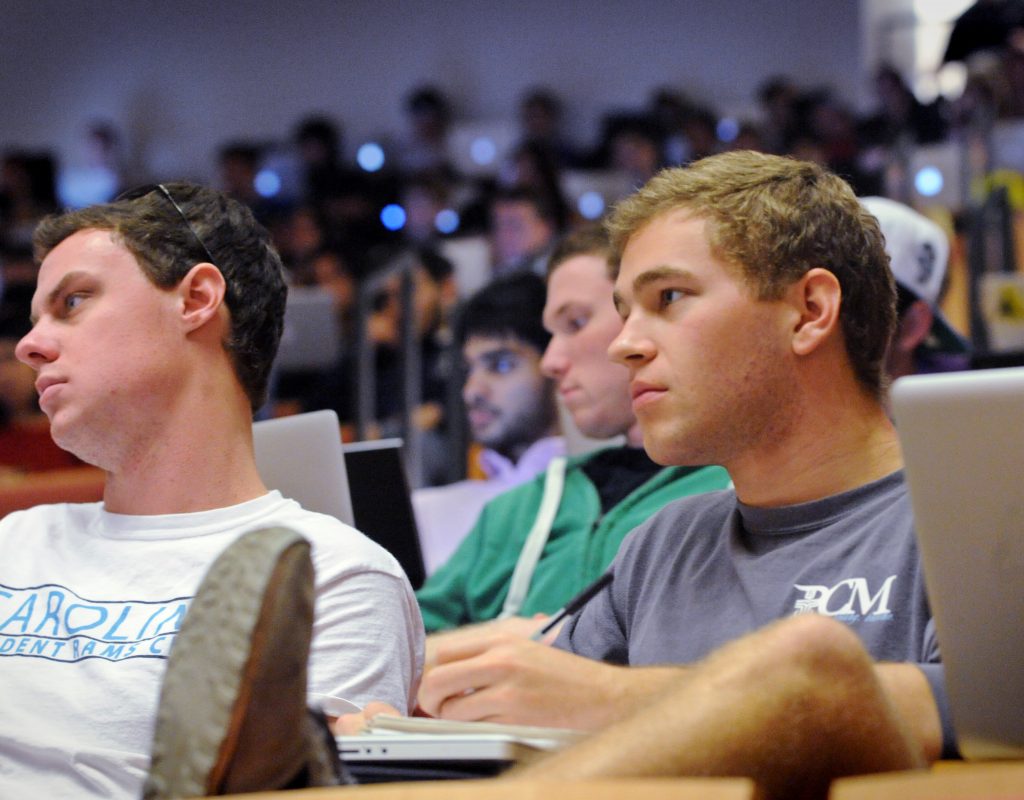 Intro to entrepreneurship: Spreading seeds of creative thinking to 300-plus students

It was a couple of weeks into the fall semester, and some 300 undergraduates — half of them first-year students — filed into a large lecture hall in the new Genome Sciences Building as Elvis Presley crooned over the loudspeakers.

Everything about the course they were taking was unusual and maybe even unsettling. It was an introductory entrepreneurship class that focused on the importance of making a difference in the world. Professors and guest speakers kept telling the students it was actually acceptable to make mistakes. The class was co-taught by Holden Thorp, a chemist-turned-chancellor, along with University Entrepreneur in Residence Buck Goldstein and former Economics Chair John Akin.

The class was one of a series of new “super courses” in the College, large classes designed to be more engaging and interactive.

It used instructional technology to engage students in and out of class and featured an array of guest lectures from leading scholars, scientists and entrepreneurs. And each class began with a song from a digitized playlist of monumental music selected by Thorp and former Chancellor James Moeser, an accomplished organist and distinguished professor of music.

Today’s tune was Presley’s “Heartbreak Hotel,” selected for its importance to rock and culture.  But it also reflected the mood in Chapel Hill after Thorp had announced he would step down as chancellor at the end of the academic year. That day Thorp shared with students his own hits and misses as an entrepreneurial chemist.

It was just another teachable moment in Econ 125, “Introduction to Entrepreneurship.” The professors, after all, wrote this on the syllabus: “Our goal is to move you outside your comfort zone and introduce you to a different way of looking at the world.”

“We have had lots of students in the class who are starting businesses already and coming to talk to us about that,” Thorp said later. “But students who end up not doing those things will hopefully have an appreciation for how hard it is to do something with your idea.”

Senior Leah Downey, who is pursuing double majors in math and economics and a minor in entrepreneurship, served as a teaching assistant for the course. She said students really grasped an important lesson from the class — that in order to succeed, sometimes you have to fail.

“Entrepreneurship is about risk and uncertainty and figuring things out,” she said. “It’s a good lesson, and it’s cool to see freshmen come to the realization that maybe this class and Carolina is about more than just maintaining a 4.0.”

In addition to Spotify, an online music site and app that Goldstein likes to call “a jukebox in the sky,” the class used other technological tools to help break up the large class and make it more interactive.

The professor trio even took an entrepreneurial approach in designing the class. (It was created in part due to high demand for the limited number of spots in the College’s minor in entrepreneurship, which is housed in the economics department and features five different “tracks” or paths of study— commercial, social, scientific, sports and artistic.)

Guest speakers and professors held “Google Hangouts” — sort of like virtual office hours — with students. Using Poll Everywhere software, students answered a question at the beginning of class that assessed their knowledge of course readings and at the end of class to test their comprehension of the lectures. The software also allowed students to post anonymous questions that appeared on a large screen in front of the classroom.

Students could sign up for limited-space lunches with some of the guest speakers. They could follow Thorp and Goldstein on Twitter. They used YouTube and Dropbox to complete class projects involving videos and digital documents.

The class instructors received a grant from the Center for Faculty Excellence to work with communications studies professor Francesca Talenti to film the lectures and to help design the look and feel of the class.

The list of guest speakers — some of whom appeared in person and others via videoconference — was a “who’s who” of the entrepreneur world. Students got to hear from such diverse UNC lecturers as Joe DeSimone, an entrepreneurial chemist, and Ken Weiss, artistic entrepreneur in residence and a former producer for Crosby, Stills and Nash. They heard from outside innovators such as Wendy Kopp, Teach for America founder, and Michael Porter, a Harvard strategist. Former AOL Co-Founder Steve Case took a picture of class members using their laptops during his lecture, then tweeted about the event.

The fact that about half the course seats were reserved for first-year students was intentional, Akin said.

“Everybody doesn’t have to become an entrepreneur, but the notion that this is an entrepreneurial place, that people may have an idea and go out and turn it into something — we want that to be [the culture] of UNC. And the best time for students to learn what that’s all about is when they first arrive.”

Dennis Whittle (religious studies ’83) is UNC’s Richards Donohoe Social Entrepreneur in Residence. The co-founder of the online marketplace GlobalGiving.org, where donors can fund do-good projects around the world, Whittle echoed the sentiment of teaching students to embrace failure. He worked at the World Bank for 14 years before starting GlobalGiving, and he said at that time, to admit failure was considered a major career setback.

“A recent study said it takes 58 new ideas to get to one successful product launch,” added Whittle in his guest lecture. He shared with students the surprising number of strikeouts made by some of history’s top baseball players. “What defines a successful entrepreneur is how many times he gets back up to the plate again after striking out.

“In entrepreneurship, the only thing that matters is, did you learn from the experience, not did you succeed or fail.”

For their final class project, students were grouped into teams, where they had to come up with 3-minute projects around the theme, “What’s Your Big Idea?”

Instead of March Madness, it was December Madness, as students voted on and narrowed down the list of projects to a “final four.”

The overall winner was an idea called RecomPence, which would allow students to donate to charities every time they make a purchase on campus with their UNC “OneCard.”

Goldstein said the class was really about the intersection between science and the liberal arts, and the exciting things that can happen in that space.

“On the first day of class, we showed a wonderful slide of [Apple Co-Founder] Steve Jobs standing underneath a street sign. One sign said ‘technology,’ and the other said ‘liberal arts,’” Goldstein said. “So whether it’s bringing in guest speakers in music, history or philosophy — it was clear to us that we are right about the importance of liberal arts to entrepreneurship.”

Sophomore Sagar Shukla, who is pursuing an economics major and an entrepreneurship minor, said a key takeaway of the class was how creative thinking can be used to solve problems.

“One week we had the directors of the musical Jersey Boys come and speak about innovation in the arts,” he said. “That theme was propagated throughout the [semester] — that innovation is a process, and that’s one thing the class has shown us through unique lenses.”

Read more stories on creative teaching and learning, part of the package “Learning 2.0”: