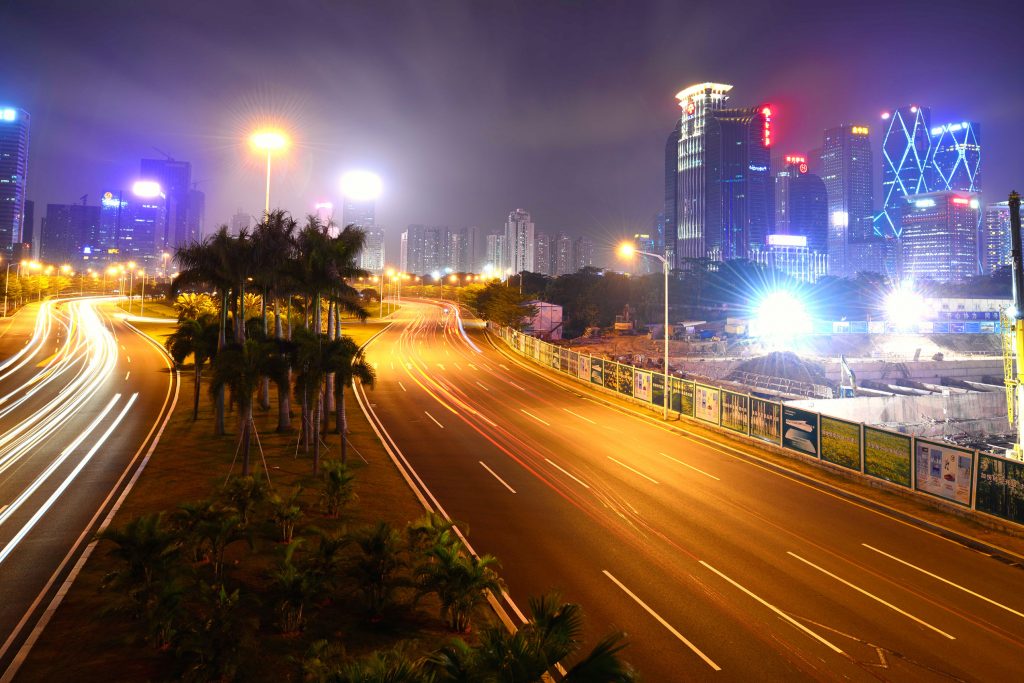 Shenzhen is a metropolis of more than 15 million people who commute to work on superhighways and live in skyscrapers. (photo by Yan Song)

Imagine if Myrtle Beach morphed into a megacity double the size of New York City in just three decades. Impossible? Not in China.

In the early 1970s, the sleepy fishing village of Shenzhen was home to 30,000 residents who traveled dirt roads to farm rice and fish the sea. Today, Shenzhen is a metropolis of more than 15 million people who commute to work on superhighways and live in skyscrapers.

That’s just one example of China’s light-speed transformation. The nation scrapped a Soviet-style economy for a market-based and city-based strategy that resulted in 390 million people moving from rural areas into cities during an economic boom unprecedented in human history. Since the 1980s, China has built more skyscrapers, malls, hotels, highways, bridges, tunnels, houses and apartments than all the other countries combined.

As the economic tsunami was cresting, some leaders turned to Western planners for advice. In 2003, Shenzhen hired a young, U.S.-trained academic named Yan Song as a consultant. Song, who grew up in Shenzhen and was a faculty fellow at UNC, studied how Chinese cities were developing. And she saw trouble. Song decided to invite a group of experts from the American Planning Association to meet with Chinese leaders. The U.S. contingent held nothing back, warning the Chinese to not make the same mistakes that U.S. cities made during the 19th and 20th centuries.

“We told them not to tear out Beijing’s bike lanes,” remembers Song, today an associate professor of city and regional planning. They told the Chinese that more cars would cause major problems and that different kinds of development projects — transportation, industrial, commercial, residential, and educational — needed to be better integrated.

“But they didn’t listen,” Song says. It was cheaper and quicker to ignore such approaches, which would’ve required overhauling the way China’s planning agencies operated.

China stayed the course. Shenzhen turned into a manufacturing supercity, as did dozens of former small cities. And Beijing became one of the most congested and polluted cities in the world. This past winter, the level of pollution in the capital city was 25 times higher than what’s considered safe, and 29 other Chinese cities were enshrouded in a gray haze of smog so dense that it stung the eyes.

That’s just the air. “Rivers are open cesspools,” Song says. And some lakes are so polluted that algae blooms have turned the water into a green, toxic sludge that’s [endangering] drinking water for millions of people.

As this transformation was taking place, Song joined UNC in 2003 as an assistant professor and continued to consult with Chinese planners. In 2009, she started UNC’s Program on Chinese Cities to provide research, training and education to Chinese planners and leaders who are open to better planning practices. She formed a consortium between UNC and Beijing University to bring Carolina scholars to China, apply for grants and work on urban planning projects together.

Song also wrote research papers and books, including Smart Urban Growth for China (2009), in which she documents how China’s urban planning process laid the foundation for economic growth. She also notes China’s curious development patterns, including highways and coal plants built in environmentally sensitive areas, a lack of mixed-use development, and inefficient land-use practices such as sprawling educational campuses and cramped residential complexes.

One cause of such problems, according to Song, is China’s planning bureaucracy. Several planning agencies at various levels of government are responsible for developing different parts of cities, and Song found that those plans are often poorly coordinated.

In Beijing, development plans resulted in a sprawling city with wide roads, encouraging more car use. In Shenzhen, a new subway station was put in a wealthy, low-density residential area because that’s where influential planners and rich residents wanted it. “That station should’ve been built in a medium-to-low-income area,” Song says, where a lot of people live and use trains.

Those sorts of local development shenanigans still plague China, as they do many other countries including the United States, even as planners try to back China out of the uber-urbanization corner.

Still, Song sees positive signs in China, partly because its communist party is starting to change the way it does business. [Editor’s note: China recently announced it would implement a tax on carbon dioxide emissions.]

When China began modernizing, Song says, local and provincial political leaders knew they could rise through the ranks of China’s lone political party based largely on how well they adhered to mandates from the central government. The most important mandate was to urbanize as quickly as possible. As a result, provincial leaders gave little forethought to the environment or sustainable planning practices, such as integrated development of highways, subways, residential areas, commercial hubs, industrial zones and educational centers.

“But that’s gradually changing,” Song says. The central government is now issuing new mandates. “One of them is sustainability,” she says. Another is harmony between rural and urban areas, between poor farmers and wealthier city residents.

Those are two reasons why a dozen Chinese mayors came to North Carolina in 2012 to get a firsthand look at better development practices. Led by Song and UNC colleagues, they toured Research Triangle Park, met with corporate and city leaders, and visited Hillsborough to get a feel for how a small town can be vibrant and sustainable.

“Although most Chinese cities are still urbanizing fast, leaders know that such dense and sprawling development might not be what people want,” Song says. “In the United States, there’s a good range of densities [available] to people.”

Song knows that large cities in need of redevelopment have their work cut out for them, but there are many smaller towns — the Shenzhens of the future — that can avoid the mistakes of the recent past. They’re already looking to Song’s program for help. For instance, she’s linked UNC’s Jack Kasarda with Chinese planners who are now using his concept of building aerotropolises: cities planned around airports to allow for integrated urban development geared toward efficient global trade.

“There’s now a huge demand in China for best practices,” Song says. “Where to grow and how to grow. There’s a cry for knowledge.”

That’s good, because there’s a cry from beyond its borders for China to turn its current pollution nightmare into a distant memory . . . as fast as possible.

Yan Song is an associate professor in the department of city and regional planning and directs the Program on Chinese Cities in the Center for Urban and Regional Studies.

China by the numbers:

• China’s population is 1.3 billion, about a billion more than the United States.

• Between 1981 and 2001, China built 70 billion square feet of housing — a third of the total amount of housing in the United States.

• Between 1990 and 2011, in the city of Shanghai alone, new construction totaled more than 24 billion square feet of floor space — that’s about 9,000 Empire State Buildings.

• Since the 1980s, about 390 million people have moved from China’s rural areas to the cities during what Song accurately calls the greatest human migration in history.