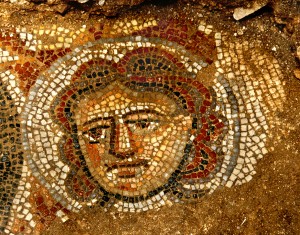 A closeup of the Huqoq mosaic with female face. (Photo by Jim Haberman)

A monumental synagogue building dating to the Late Roman and Byzantine periods (ca. 4th to 6th centuries C.E.) has been discovered in archaeological excavations at Huqoq in Israel’s Galilee.

Huqoq is an ancient Jewish village located approximately two to three miles west of Capernaum and Migdal (Magdala). This second season of excavations has revealed portions of a stunning mosaic floor decorating the interior of the synagogue building. The mosaic, which is made of tiny colored stone cubes of the highest quality, includes a scene depicting Samson placing torches between the tails of foxes (as related in the book of Judges 15).  In another part of the mosaic, two human (apparently female) faces flank a circular medallion with a Hebrew inscription that refers to rewards for those who perform good deeds.

“This discovery is significant because only a small number of ancient (Late Roman) synagogue buildings are decorated with mosaics showing biblical scenes, and only two others have scenes with Samson (one is at another site just a couple of miles from Huqoq),” said Magness, the Kenan Distinguished Professor in the department of religious studies in UNC’s College of Arts and Sciences. “Our mosaics are also important because of their high artistic quality and the tiny size of the mosaic cubes. This, together with the monumental size of the stones used to construct the synagogue’s walls, suggest a high level of prosperity in this village, as the building clearly was very costly.”

Excavations are scheduled to continue in summer 2013.