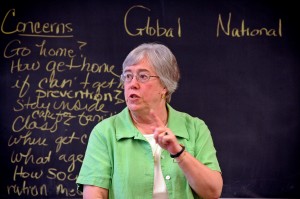 Jean DeSaix left her hometown of Williamston, N.C., years ago. But it never left her. DeSaix, a UNC biology master lecturer, understands those university students from small towns and rural areas. Many students are overwhelmed by what seems at first to be an enormous campus.

DeSaix has always been an advocate for these students. “People born in rural counties are just as smart as those born in Greensboro,” she quipped. “But some arrive at UNC not as confident or not aware of how smart they are.” She sees a dual role with her students: helping those who are already on the fast track but also focusing on the diamonds in the rough. “Those students are special to me,” she said.

A Mentor and a Scholar

DeSaix arrived in Chapel Hill in 1967 for graduate school. One of two female students in the zoology program, she was occasionally asked to serve cookies and punch during special events. Nonplussed, she earned a master’s in zoology and a doctorate in curriculum and instruction from UNC.

DeSaix has taught about 800 students in each of her nearly 40 years at Carolina. But she also chose a role that extends her reach beyond the biology lecture hall. DeSaix also serves as director of the Health Professions Advising Office, faculty adviser for UNC’s Habitat for Humanity program, and, along with her husband Peter, adviser to the Episcopal Campus Ministry.

Meredith Gilliam (chemistry/Asian studies ’07) recalls DeSaix’s welcoming demeanor at the Episcopal Campus Ministry gatherings. “She was a constant presence, welcoming new students, collecting updates on our personal lives and making us feel at home,” said Gilliam, who is now pursuing an MD/MPH degree from UNC. She said DeSaix is someone who truly enjoys helping people. Once Gilliam left her planning notebook in DeSaix’s office. By the time Gilliam checked her email, DeSaix had alerted her where her notebook was and emailed her the appointments she had the next morning.

Alumnus Paul Shorkey (biology ’11) believes DeSaix was instrumental in his receiving a Rhodes Scholarship. “It was through her incredible support that I had the confidence to apply. She was extraordinarily helpful in keeping me grounded in the weeks before the interview.”

Ryan C. Vann, one of DeSaix’s former teaching assistants, said he has not made any major professional decisions without first seeking her advice.

“When I think of all the individuals who have had profound effects on my academic and professional development, no one comes to mind more often than Jean DeSaix,” said Vann (biology ’98, clinical lab science ’03). “That a shy freshman from rural Yadkin County caught her eye as a potential instructor speaks to her eye for teaching talent and to her willingness to nurture that talent.”

DeSaix was surprised to receive UNC’s 2012 Mentor Award for Lifetime Achievement for contributions to teaching and mentoring beyond the classroom. Her students and colleagues were not. “While we’re here on this earth we can all make things better,” she said. ”All who do well can point to those who helped them. We all need a mentor.”