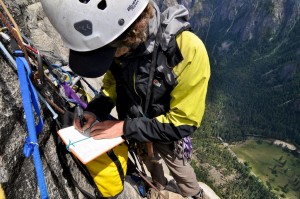 UNC geology graduate student Roger Putnam is busy doing research this summer, but he won’t be sitting in front of a computer all day. He’s currently scaling El Capitan, a 3,000-foot granite cliff in Yosemite Valley that is a favorite challenge of rock climbers. He’s mapping the cliffs as part of his master’s work. Taking a break from the mountain, Putnam answered some questions about his research in this e-mail interview. When he’s not rock climbing for work or play, Putnam also enjoys surfing, skiing, fishing and trail-running.

Q: You are working on creating the first comprehensive map of the southeast face of El Capitan to help understand magmatic processes. Give us a brief history of El Capitan’s formation.

Between 105 and 90 million years ago, the west coast of California geologically resembled the Pacific Northwest today. It was an area where an oceanic tectonic plate is being overridden by a continental plate, a tectonic setting that geologists call a subduction zone. These areas are typified by chains of large volcanoes (once again, think about the Pacific Northwest where Mt. St. Helens, Mt. Rainier and Mt. Hood are located.). Granite bodies (known to geologists as plutons), including the entire Sierra Nevada Mountain Range and El Capitan, are thought to be the roots of these ancient volcanos.

Around 10 to 4 million years ago, crustal extension began in the western part of North America. In places of crustal extension, large blocks get uplifted. This process raised these granitic volcanic roots from the considerable depth at which they formed to form the tallest mountain range in the continental United States.

Approximately 2 million years ago, the earth began to enter a series of ice ages, during which time the mountain range was subjected to massive glaciation. These large glaciers carved out many valleys in the Sierra Nevada that display the characteristic U-shaped profile. Yosemite Valley was exhumed in this fashion.

Putnam is studying the large cliff’s formation and also contributing to the understanding about the dangers of rock-falls.

Q: What goals are you trying to achieve with the research? How will it help advance what we already know about El Capitan?

The significance of this study is threefold:

Perhaps the most immediate significance of this study will be its contribution to the field of rock-fall analysis. Yosemite’s cliffs are among the most accessible in the world, making them particularly prone to accidents. Over 600 rock-falls have been recorded in Yosemite National park since documentation began in 1857, most of which occurred in Yosemite Valley. This study will contribute to understanding rock-fall genesis and frequency in Yosemite Valley — helping to save lives and property.

Finally, this study will create an immensely valuable interpretive tool. Yosemite National park is a UNESCO World Heritage Site and boasts an annual visitation of over 4 million people from around the world. While in Yosemite Valley looking at the majestic cliffs, the majority of visitors are having the most intimate experience with plutons they will ever have. Having knowledge of the mechanisms whereby the cliffs were created is paramount to communicating their natural history as well as the discipline of geology in general.

This favorite of rock climbers is a perfect venue for study because of its clean, vertical exposure, easy access and stable weather conditions.

Q: Why is this favorite of rock climbers an ideal place for this study?

There are few places in the world that display such perfect, clean, vertical exposure as El Capitan. Most of these places tend to be situated in remote places that are prone to poor weather such as Baffin Island, Chilean Patagonia and the Karakoram Region of Pakistan. El Capitan is located in central California and is subject to remarkably stable weather, making ascending the face particularly safe. Furthermore, the base of the cliff is also a scant 10 minute walk from a road.

Q: How many times have you climbed El Capitan before? How far up on the rock face will you go for this particular study?

Before this study began, I had climbed El Capitan 12 times by 9 different routes. My slowest time on the wall had been three and a half days and my fastest was 10 hours 27 minutes.

For this study, I have already (as I write this) climbed the entire face of El Capitan twice and rappelled it once. I have also climbed and rappelled various other small sections of the rock. If weather cooperates, I plan on climbing it once more before the end of my field season.

Q: For the uninitiated, what are the challenges and dangers for rock climbers in scaling El Capitan?

The difficulty of climbing El Capitan is of such an extreme nature that only a small percentage of climbers can do it. However, climbing it is almost a rite of passage among hard climbers worldwide. There are a multitude of dangers present while ascending El Capitan. There are many objective hazards that come from the environment such as storms, dehydration and rock-fall. One has to be extremely proficient at handling safety equipment and rope management. A small mistake in rope handling can be catastrophic. Some of the greatest challenges are psychological. One has to be prepared to emotionally deal with tremendous exposure for days on end.

Q: How will you go about undertaking your field research? Explain the processes you’ll undergo in studying this giant monolith?

We have taken a series of high-resolution gigapan images of the face of El Capitan. We will be overlaying these images on LiDAR (basically laser-radar) data in GIS. This will give us a 3D image of the face on which we can digitize the contact lines between the different types of granite. To determine what type of rock these polygons on the map are, these areas of the cliff must be visited. This is being accomplished by climbing and rappelling established climbing routes. We are also “crowd-sourcing” part of this work to recreational climbers who are taking scale photographs of the rock as they climb up the rock. As I climb/rappel the rock, I am taking samples to help us better understand the rock units exposed on the face and how they geochemically interact.

Before this current study, Putnam had climbed El Capitan 12 times by 9 different routes.

Q: What funding did you receive to help with your research?

Q: If you had to “tweet” about the experience of climbing El Capitan this summer, what would you write?

I am not in the Twitter world … so this is my best shot:

I am blessed to be here, climbing one of the most famous monoliths in the world, trying to understand how it formed.