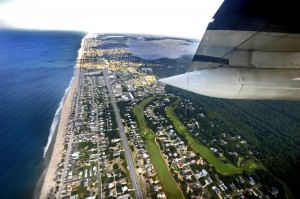 The North Carolina coastline as seen through the window of a U.S. Coast Guard plane (photo by Brett Clark)

The Future of the Outer Banks: Climate change’s effect on N.C.’s barrier islands

Sometime when you’re in the mood to be amazed, take a look at a satellite view of North Carolina’s Outer Banks. They don’t look like much — just a sliver of terra firma standing between our coast and the deep, dark North Atlantic. But those barrier islands are our mainland’s first line of defense. They absorb energy from big ocean waves, protect estuaries, and help reduce flooding when tropical storms and hurricanes come barreling up the eastern seaboard every year.

The shape of the Outer Banks has slowly changed over the centuries, says Laura Moore, an assistant professor of geology in the College of Arts and Sciences. And now changes in the climate are speeding up the process. Bigger and stronger storms, rising sea levels, bigger waves and even changes in the islands’ vegetation have already subtly altered their topography.

Moore uses historical maps, geologic data and computational modeling tools to create simulations that show how the barrier has moved since it first formed about 8,500 years ago, and to calculate how the islands may continue to evolve in the decades and centuries to come.

Barrier islands wander continually. They sit hunkered low in the water, their heads held just above the surf. When a big storm comes along and the water level rises, wind and waves wash over the surface, picking up sand from the shore face and sweeping it to the other side of the island. Alongshore currents also drag some of the sand and sediment up or down the coast.

All of these processes combine to send barrier islands on a slow, landward migration. As long as currents and waves don’t carry away the islands’ sediment too quickly, there will be sand available to resupply the other side of the island and enough of a foundation to keep the top of the barrier above water.

Some states have tried to prevent barrier island migration by building seawalls and other structures. But these are only a temporary fix, Moore says, and they can do more harm than good. Eventually the sea will scour away the sand that makes up the beach — a huge structural loss for the island. As sea level rises, water will creep over the wall, or a storm will breach it. The island, having lost the protection of the beach, will be inundated by waves and storm surge.

For the moment, North Carolina law doesn’t allow seawalls. “But this is going to be an issue the state will face in the future,” Moore says. According to her models, it’ll take a high rate of migration over the next few centuries to keep the Outer Banks above sea level. “The islands need to be able to move,” she says. “But this is not something that many folks would want to see. We’ve got homes built on the barrier islands. There will be more pressure to build structures to keep our homes and infrastructure where they are. In this case, though, structures will only hasten the loss of the islands.”

When Moore first started studying barrier islands and climate change 12 years ago, she says, the field was mostly focused on sea level rise. And while that’s a big part of the changes coming for the Outer Banks, the picture is more complicated than that.

Moore and her team of students and postdocs are now putting their modeling tools to work on the complex questions of ecomorphodynamics — the relationships between biological and physical processes. Take, for example, the way grass, wind and changing temperatures all influence on another.

Temperature determines which species of vegetation can grow on an island. And the vegetation determines what paths the wind will take as it races over the dunes, scraping up sand from some spots and dumping it in others. The placement of the sand affects which vegetation is able to grow and where — which, in turn, determines the wind patterns. All of these things together shape the shoreline, which then affects the way the island is able to hold up to storms.

Computational modeling tools can help us better understand these complex interactions and their role in the future of the Outer Banks, Moore says. Knowing what our barrier islands are in for could help us to keep their heads above water.

[ By Margarite Nathe. Nathe was a writer at Endeavors magazine. This story appeared in the fall 2012 issue of Carolina Arts & Sciences magazine. ]